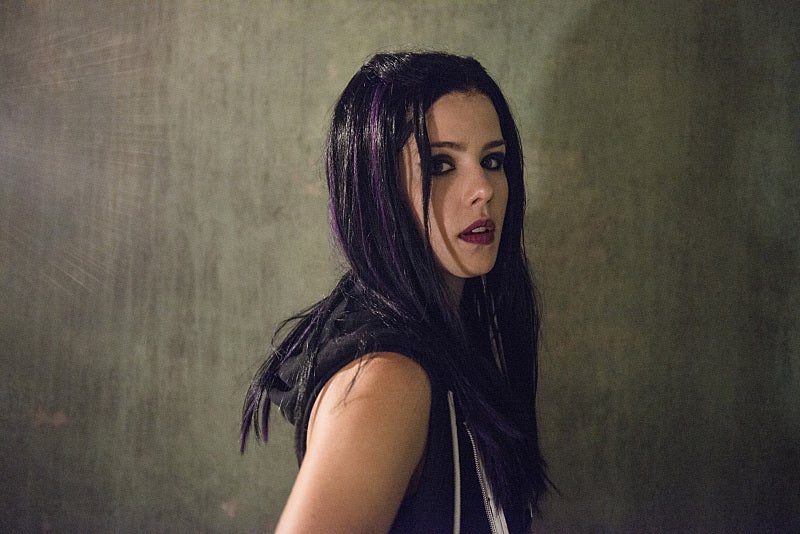 “The Secret Origin of Felicity Smoak” opens with a montage of training sessions: One between Laurel Lance and Ted Grant, another between Arrow and Arsenal, and a sequence between Speedy and Malcolm Merlyn.

Felicity does her own training, too, just in the form of ab videos. Her training is cut short however, when Ray Palmer pays a house visit. He has big plans for providing renewable energy to Star City, which he would love to share with Felicity, if Felicity’s mother, Donna, hadn’t just barged in out of town. Donna Smoak is very much Felicity’s opposite: flirty, outgoing, and technologically inept. Ray leaves the two, but not before giving Donna the latest Palmer technology smart watch. As the Smoaks catch up, it triggers a flashback to five years ago for Felicity.

The origin of Felicity begins, with Felicity coding a hacking virus with her college boyfriend and friend. They try to hacking the university’s student loan system, but Felicity pulls plug at the last minute out fear of the consequences. Felicity’s boyfriend says that they should direct their talents to helping people in larger ways, and not pulling selfish pranks against the school. The next day, Smoak and her boyfriend discuss the dire consequences of their illicit hacking. Almost on cue, the FBI ambushes and arrests Smoak's boyfriend.

Back in the present, Oliver visits Speedy at her new apartment, bought and paid for by Malcolm Merlyn. Angered by Speedy’s acceptance of Malcolm’s “blood money,” Oliver picks a fight with her about having a relationship with the Dark Archer. As Speedy storms out, the surrounding area plunges into darkness. The rest of Star City goes black as well, sending the city into a temporary blackout. The culprit reveals itself as Brother Eye. The mysterious entity appears on television screens across Star City as a sinister eye (resembling the Eye of Sauron), announcing itself as an organization that will bring its own version of justice to Arrow’s city.

Afterward, Felicity and her mom visit club Verdant. Oliver and Diggle (with baby in tow) rendezvous with Smoak there. Diggle passes of the baby to Donna before Team Arrow retreats downstairs to unravel the Brother Eye mystery. The Lances are pursuing the case too, with Laurel acting as the interim District Attorney. As everyone digs into the case, Brother Eye makes its next announcement. It plans to target Star City’s national bank with a virus that will bankrupt the city and it’s citizens . A distressed Star City forms a mob outside the bank, which only escalates when Laurel orders a riot squad there. Arrow and Arsenal are able to defuse the riot with a tear gas grenade, but Felicity struggles to dismantle the virus back at the base, and reveals that she can’t. When Arrow asks why, Felicity reveals that the virus is hers, written five years ago.

Felicity unveils her past to Oliver as a “hacktivist,” delivering civil disobedience by hacking into government databases and revealing their misdeeds. She says that’s where she wrote the virus with her friends, and that one of the group’s members, Myra, may have hatched the virus as Brother Eye. Arrow leaves to track Myra down.

Elsewhere, Speedy is locked out Verdant. Oliver comes to her, where they begin to mend bridges broken by Oliver's secrecy. Oliver wants Speedy to reject Malcom’s money, but Speedy is still unconvinced.

Later, Arrow and Arsenal track down Myra at his corporate job. Myra pleads his innocence, but reveals that he showed off his virus code to a few people years ago. Essentially, anyone could be Brother Eye. The only other possible suspect then, is Felicity’s old boyfriend. However, Felicity says that’s impossible. Her boyfriend committed suicide in prison before his sentencing.

Saddened by opening up old wounds, Felicity sulks in her office at Queen Consolidated. Ray finds her there, after losing his bid to re-name Starling City into Star City. Felicity almost tells Ray what’s bothering her, but her mother storms into the office and interrupts. The two argue about their polarizing differences—Felicity angered at her mother’s disapproval for being a bookworm. Wounded by Felicity’s outburst, Donna leaves.

Felicity goes back to the Arrow hideout, trying to trace the Brother Eye hacker. Noticing her family distractions, Oliver encourages Felicity to go smooth things out with her mother. Felicity meets Donna in Felicity’s apartment, where the two come to an understanding. Donna reveals, however, that she only came to Starling because she received a free flight from an unidentified source. But the two are ambushed and taken hostage by Brother Eye’s goons. The two are taken to Brother Eye’s headquarters, where they meet the group’s leader. He reveals himself as Felicity’s old college boyfriend, who is far from the ghost that Felicity believed him to be. He sent Felicity’s mother the free tickets to get her to Starling City.

Turns out, the NSA recruited the boyfriend and faked his death. He was going to reach out to Felicity, but was disgusted with her employment at major cooperation like Queen Consolidated. He reveals his grand plan to cripple Starling City’s finances and rob their finances. He needs Felicity to break through the treasury’s firewall however, and says he’ll kill Donna if she doesn’t. With no other option, Felicity breaks down the firewall.

As Brother Eye leaves to acquire the vulnerable Treasury money, Felicity remembers that Donna still has the smart watch that Ray Palmer gave her. Accessing the watch’s wifi, Felicity sends out a distress signal to Team Arrow. Arrow shows up moments later. As Brother Eye and Arrow fight, Diggle and Arsenal handle the rest of the crew outside. Arrow becomes too distracted by Brother Eye’s armada of computerized guns to stop the hacker, but that’s hardly a problem. Felicity gets the drop on Brother Eye and knocks him out. Looks like those training sessions were actually doing something.

With Brother Eye in custody, Felicity and Arrow discuss how important it is to love family, no matter how crazy they drive them. Elsewhere, Laurel visits Ted Grant at his gym, where she confides that someone killed her sister and got away with it. Grant says he now understands how to properly direct Laurel’s anger and train her. Ted asks if Laurel wants a red or black fighting robe. Naturally, Laurel picks Black, starting her path to the Black Canary persona in earnest.

Across town, Oliver visits Speedy at her apartment. He agrees to move in with her, on the condition that once Speedy becomes self-sufficient, she will donate all of Malcolm’s money to charity. As the siblings watch TV together and make amends, Malcolm spies on them from afar.

While the episode looks like it is going to end on a happy note, Roy experiences a haunting dream that night. In his nightmare, Roy sees murdering Sarah with the arrows that killed her, suggesting that Arsenal is the Canary’s murderer.

Arrow Recap With Spoilers: The Secret Origin Of Felicity Smoak