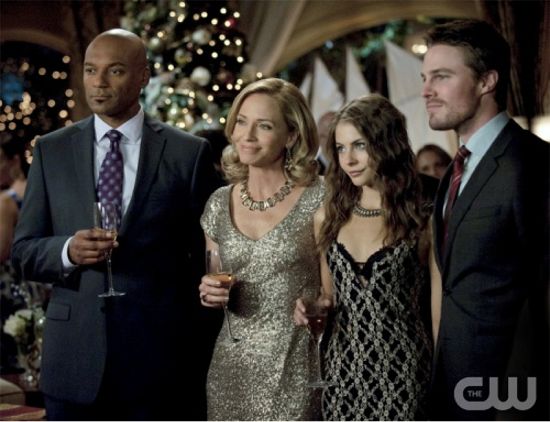 The "Year's End" episode of Arrow was one of the most action-packed episodes of the season to date. A new vigilante shows up in Starling City, and he is killing his victims with black arrows. Detective Lance realizes the killer is not Arrow, but he suspects some type of copycat archer. Who is this new Dark Archer terrorizing Starling City? As far as Oliver Queen, he's busy training with John Diggle and planning a holiday party with his family. After Oliver and his father disappeared, it seems that the rest of the Queen family stopped celebrating Christmas, and Oliver is determined to restore the Christmas spirit. When Oliver Queen realizes there is a Dark Archer killing off the people on his list, he decides to team up with Detective Lance. He sends Detective Lance a cell phone so that they can communicate, and Detective Lance gives Arrow one of the black arrows to trace. Oliver Queen turns to Queen Consolidated's computer expert Felicity Smoak to trace the black arrow. With just a couple keystrokes, Felicity gives Oliver an address. Of course, when Arrow goes to investigate, he finds the place rigged with a booby trap. Arrow narrowly escapes before the place explodes. At the Queen Christmas party, Tommy Merlyn shows up with Laurel Lance as his date. After an awkward moment, Laurel asks to talk to Oliver alone. She tells Oliver that he's the reason that she's had trouble moving forward with Tommy. Oliver tells Laurel that he's happy for the both of them. Meanwhile, there is tension brewing between Walter Steele and Moira Queen. Moira is upset that Walter is still investigating her, but Walter tells her that she just needs to come clean about what's going on. She promises to reveal everything after the party. Upstairs, Oliver walks in on his sister Thea in a state of partial undress with her new friend Shane. While Oliver is arguing with Thea, Diggle interrupts with news that the Dark Archer has taken hostages. The Dark Archer is threatening to kill a hostage every hour until Arrow comes to meet him. Even though the police are kept at bay because the area around the hostages has been rigged with explosives, Arrow is able to glide above the explosives and crashes through a window. Arrow frees the hostages, but he winds up in a face-off with the Dark Archer. Arrow is hit in the back with a couple arrows. The Dark Archer is about to unmask Arrow, when Arrow stabs the Dark Archer in the leg with an arrow. Arrow manages to escape and calls Diggle for help. Oliver Queen wakes up in a bed. Diggle had come to his rescue and even invented the cover story that Oliver had been in a motorcycle accident. As Oliver shares a heartwarming moment with his sister Thea, the scene flashes to the Dark Archer unmasking. It's Tommy's father Malcolm Merlyn. As Walter Steele steps into an elevator, someone stabs a needle into his neck. The scene flashes to Moira Queen meeting with Malcolm Merlyn. It turns out he's kidnapped Walter because Moira couldn't keep him under control. It's also revealed that Malcom was behind killing Oliver's father and has a plan that will result in the death of thousands of innocent people. Oliver tells Diggle that he feels like he failed the city tonight. Oliver also reveals that the Dark Archer told him that somebody compiled the list, and Oliver wonders if it was someone other than his father. Oliver is suspicious that there might be someone else out there even more of a danger than the Dark Archer. 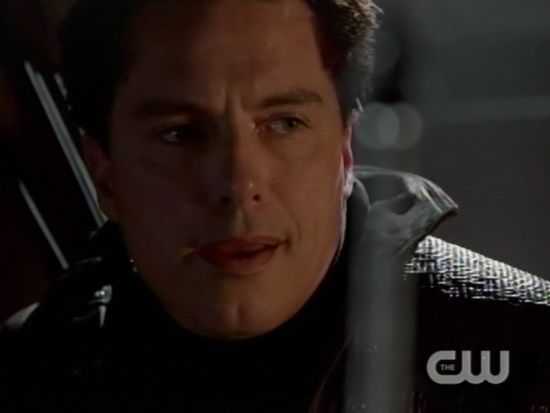