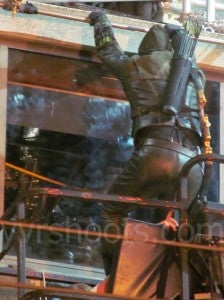 A series of new photos taken on the set of The CW's Arrow Friday appear to show the masked vigilante (by way of leading man Stephen Amell's stunt double). YRV Shoots, who took the photos, suggest that Amell himself was likely inside the building, playing opposite Deadshot actor Michael Rowe while on the exterior, Deadshot's rifle was firing off a shot and Green Arrow's double was bursting through a building's exterior window. Deadshot is just one DC character who was reportedly on set Friday, with both Michael Rowe and actress Emily Bett Rickards, who will play Felicity Smoak (the stepmother of Firestorm/Ronnie Raymond) tweeting that they were on-hand for the superhero adaptation that day, when YRV claims the shoot lasted long into the night. Check out a number of the photos below, featuring Amell's stunt double, stunt coordinators and the rig that gives him access to the "candy glass" window he's about to barrel through. The shoot, taking place in Vancouver, BC, is only one of a half-dozen or so shows that have recently started shooting in the area, including Psych, Supernatural and Once Upon a Time. Arrow will debut on the CW Network in October. [gallery link="file" order="DESC" columns="1" orderby="title"]