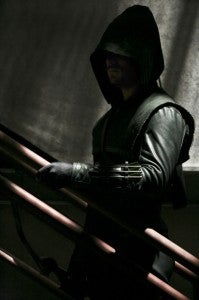 During an interview with SFX Magazine, Arrow leading man Stephen Amell was pinned down on one of the most common complaints that longtime DC Comics fans have with the hit CW show: the fact that Oliver Queen, long an adherent to the common superhero morality that precludes killing, has no such issue on the TV series. He's already killed a couple of times in the show, something that irks not only the authorities in the fictional city of Arrow, but also comic book fans in the real world. Amell, for his part, says it's all just part of giving Oliver flaws and humanity, and seems to imply there was never any serious consideration of doing it another way. "The central character of all the great shows on television, and I don't list these names to draw comparisons, but as an example – Tony Soprano, Walter White, Don Draper – these are all incredibly flawed people that do regrettable things, terrible things, unforgivable things," Amell told SFX. "But as long as they're pursuing an overall goal, and as long as they engage the audience, that's why those shows resonate. I've always wanted to play somebody who was unflinching, who set up for something and followed through with it. That's why we have to kill people on the show, because he's trying to clean up the city. To think that there wouldn't be collateral damage, that would be farcical." The series, which airs on Wednesdays at 8 p.m. on the CW Network, has already been picked up for a full season and a second season pickup is expected. So apparently in spite of some grumbling from the most passionate fans, they're doing something right.