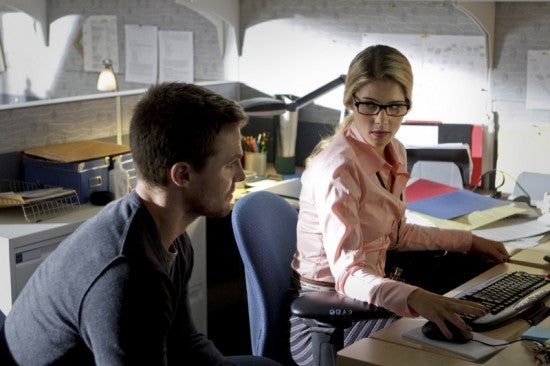 Since Black Canary joined the cast of Arrow, some fans have speculated that it could lead to Caity Lotz's Canary being joined by Jessica de Gouw's Huntress to form that base of the Birds of Prey, DC's all-female, street-level vigilante team. The third key member of that team for years was Barbara Gordon, then acting as Oracle after she was paralyzed from the waist down and could no longer be Batgirl. Barbara, of course, is seemingly off-limits since her father is the lead character in Fox's upcoming Gotham pilot (played by Southland's Ben McKenzie), but, as a reporter pointed out during a roundtable ahead of last week's episode "Heir to the Demon," Arrow does have Felicity Smoak. Again, fans have speculated for some time that Felicity might step into the Oracle role (one filled, albeit without using the name "Oracle," by Green Arrow's eventual love interest Chloe Sullivan in Smallville)--and so it wasn't surprising that someone asked producers at the roundtable whether Felicity would play a role in the upcoming seventeenth episode of the season, titled "Birds of Prey." "She plays a role, but not in the way you're hoping," said Arrow executive producer Marc Guggenheim. "Hopefully we'll get there--that occurred to us as well but we didn't have an opportunity to do that in [Episode] 17." At least for the moment, Smoak is uniquely positioned to take on such a role; not only is she already serving Oracle's tech and intelligence-gathering functions on Arrow, but her close relationship with Barry Allen sets her up to possibly play a similar role on The Flash should that show go to series.

Arrow's Felicity Smoak as Oracle? "Hopefully We'll Get There," But Not Yet, Says Producer