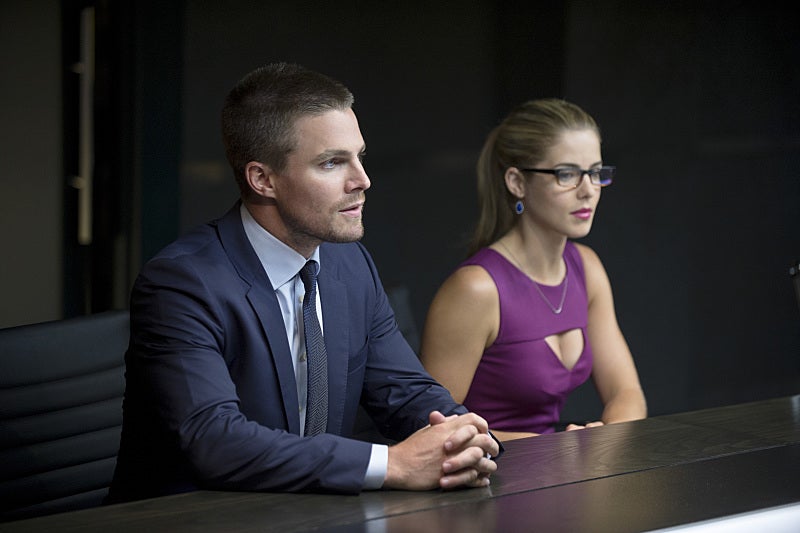 Fans hoping for a long-term relationship between Oliver Queen and Felicity Smoak on Arrow might feel like they caught an arrow in the chest tonight -- but series Executive Producer Marc Guggenheim says that things aren't as bad as they seem...

During a Q&A with reporters following a screening of tonight's premiere last week, Guggenheim was asked about both the relationship between Oliver and Felicity, and one of tonight's other big losses, the departure of Diggle.

Is it fair to say that Felicity ended things in that scene in the hospital?

It's interesting, isn't it? You know, I think you'll see that their relationship, as we've always said, is going to take ups and downs and twists and turns. There's -- it's hard to spoil it and it's hard to answer this question without spoiling too much -- but I think that Oliver and Felicity have a very emotional scene together in Episode Two. This is not the last time we'll hear the words "I love you" in connection with Oliver and Felicity but I never want to turn to the back of the book and read to everyone the last page because I think part of the fun, or the agony, of watching these people is, "they're together, they're apart, they're together, they're apart." We'll see what the future holds for them.

I think they're both conflicted. I think that's what makes their relationship so torturous, is they're both so conflicted about it. Our goal in writing that scene was to make it evenhanded in terms of who's ending it but I feel like there's a scene in Episode Two that's kind of a follow-up. I would say people should watch Episode Two if they're interested in what that scene in Episode One meant. There's a scene in Episode Two that clarifies it a bit more. It's also something we're going to be dealing with over the course of the season. That hospital scene didn't just take Oliver and Felicity and put them back in a box. The repercussions of that scene and that storyline in Episode One, that's going to follow them throughout the course of Season Three. We didn't just hit pause or reset on their relationship; this is just a development in an ongoing relationship for them -- relationship with a lower-case "r."

Obviously things are changing with Diggle, but that didn't actually mean he's off the team, right?

No, it did mean that he's off the scene, but in Episode Two...let's just say the circumstances of Sara's death change things up for a lot of our characters.