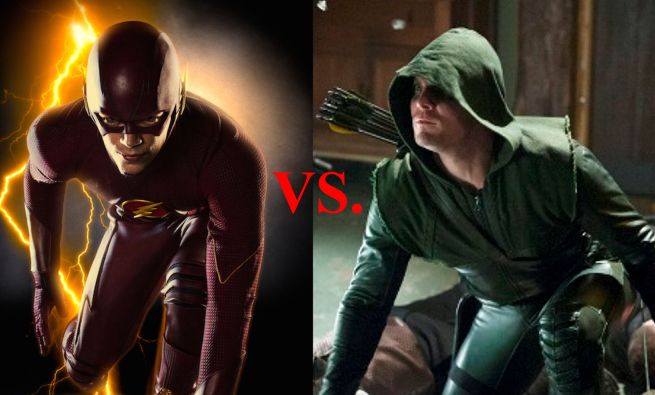 During a recent set visit by reporters, Arrow and The Flash stars Stephen Amell and Grant Gustin teased a little bit about their upcoming, two-night crossover event set to take place in December.

“I was talking about this yesterday with a friend; about how Oliver and Barry are so different and me and Stephen are just really different," Gustin is quoted as telling IGN. "We really get along outside of work and it’s been fun to show Barry and Oliver kind of butting heads. We’re seeing them learn how to work together, but it’s really funny because they’re so different and the conversations they have are hilarious.”

Amell added, “I just spoke with [director] Glenn Winter on Wednesday. We were shooting some stuff for episode 308, which is our Flash crossover episode, and he said that he had seen a cut and it was his favorite thing that I have been involved in so far on the show. I can’t say anything about what it has to do with other than that the crossovers… We are very much guests in Central City and very much the rogue team in Central City. Just as much as Grant and the Flash team are guests here. We talk and we delve into the differences between Central City and Starling City but this particular moment is very much an Arrow-centric moment."

The Flash airs Tuesday nights at 8 p.m. ET/PT on The CW and Arrow follows at the same time on Wednesdays.