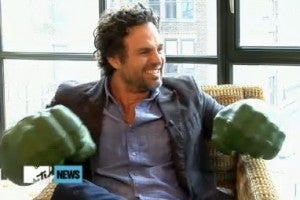 Mark Ruffalo, who will play Bruce Banner (the Incredible Hulk) in this summer's Marvel superhero bonanza The Avengers, spoke in Dimock Township, Pennsylvania, yesterday after a non-profit organization he works with provided a truckload of drinking water to a dozen or so families in the small community who charge their drinking water remains unsafe after a hydrofracking accident in 2008 contaminated the local water supply. The Pennsylvania Department of Environmental Conservation had deemed the water (which was, at times, flammable) unfit for consumption and ordered the drilling company, Cabot Oil and Gas Corporation, to provide drinking water to the community. As of November 30, both of those judgments were reversed the DEC told residents that water from their taps was safe to drink. In addition to the Pennsylvania DEC, groups made up of both locals and transplanted activists have advocated on behalf of the controversial drilling practice, saying that the water in Dimock has been fine for some time. Ruffalo and some others claim it's not, and he produced a cloudy glass of water which purportedly came from a local tap. "My water doesn't look like this when it comes out of my tap," said the actor, who explained that when he heard of the community's trouble he was driven to act. On Monday, an agreement between Dimock and the nearby city of Binghamton, New York, fell through which would have seen Binghamton trucking water in for those who wanted it. "The great thing about the Avengers and our superhero mythology is that they are people that fight for the common man over impossible odds, and for the betterment of the whole," Ruffalo told The Capital in November in regard to his anti-hyrdofracking activism. "So in some ways, that whole mythology feeds into what I'm trying to do here."