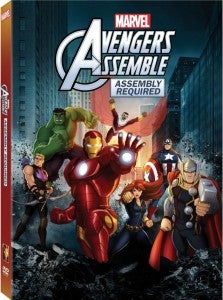 , the two-part series premiere of the hit new animated show on Disney XD, will be headed to DVD on October 8, complete with never-before-seen footage and bonus features.

In the series, the Avengers lineup from the massively successful feature film recruit Falcon to help them battle threats no single hero could vanquish--while engaging in the kind of bickering and in-fighting that comes with being a modern-day superhero team.

Can the world's most powerful team of superheroes put aside their differences and learn to live together under one roof long enough to save the world from ultimate destruction? Can two divorced men share an apartment without driving each other crazy? The answer will be revealed when the Red Skull and M.O.D.O.K. wage war on The Avengers.

Bonus features on the disc include: