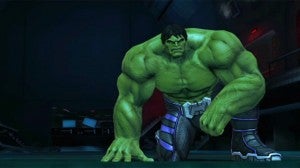 A new trailer for Avengers Initiative, a new iOS and Android video game featuring Marvel superheroes, debuted online today and not only does it feature a version of The Incredible Hulk with very space age-looking duds and a big belt buckle (is this connected to his new outfit for the Marvel NOW! relaunch?

Another interesting thing that's included is a note that it's available on "The New iPad," which our friends over at Graphic Policy are taking as a slip on Marvel's part confirming the rumored next iPad, which many technophiles have suspected might be the next thing Apple announces. Some fans have chimed in to say "The New iPad" is what they're calling the most recently-released one already, but with an announcement planned for next week, the answer should be pretty clear by then.

Most experts, though, are expecting that announcement to be the iPhone 5, so in spite of what the ad might seem to offer, probably best not to get your hopes too high up for another iteration of the most popular and expensive tablet on the market.