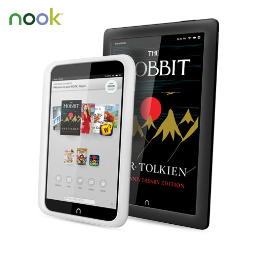 Barnes & Noble, who have until now stayed away from selling music and video online or for their e-reader devices, announced  a pair of new Nook devices today which will reportedly support a video store. The Nook HD and Nook HD+ will range in price from $199 to $269 and will be more lightweight than previous Nook Color and Nook Tablet models, with larger, higher-resolution displays. The bookseller describes the Nook HD as the "lightest and highest resolution 7" HD tablet ever," with the larger 9" HD+ being marketed to magazine and video users. These announcements are likely in response to a similar set of announcements made recently by Amazon, who rolled out a family of HD Kindle tablets earlier this month. No details are yet available on the Nook Video store, with the official release saying only that it will "offer incredible reading and entertainment like never seen before." The new Nooks also provide parental controls, along with a host of other user-specific features so that more than one user can more comfortably use the device. Compare it to your laptop, and how much easier it is when you can log your mom out and not have forty-seven desktop icons at all times. While both DC Comics and Marvel Comics have graphic novel storefronts supported by Nook devices, Barnes & Noble and ComiXology have yet to come to an agreement that would see the popular comics-reading app available in the Nook store. There's nothing in the release to indicate that will change with this release, but ComicBook.com has reached out to both ComiXology and Barnes & Noble to inquire.