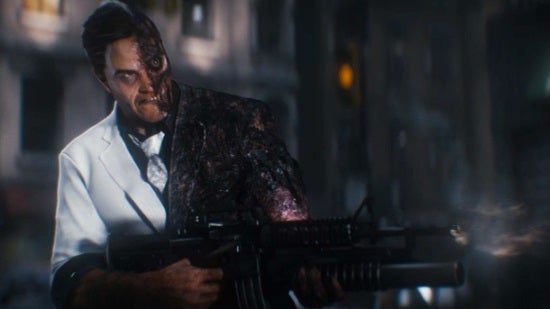 Thanks to high profile roles as Joel in The Last of Us and The Joker in Batman: Arkham Origins, Troy Baker has become one the most recognizable voice actors working today. So will he be returning to Gotham City for a role in Batman: Arkham Knight? Prior to his role as The Joker, Baker voiced Two-Face face in Batman: Arkham City. While the Joker died at the end of Arkham City, which was Mark Hamill's final performance as the character and seemed to leave no need for a replacement, we know from the announcement trailer that Two-Face will be a part of Arkham Knight. IGN asked Baker if he was interested in a role in the next Batman game. "Two-Face is back and Arkham Knight is coming out," said Baker, before breaking into hysterical laughter. Its not exactly official confirmation, but it seems pretty likely that we'll be hearing his voice in Arkham Knight. Baker isn't the only voice actor (possibly) returning for Batman: Arkham Knight. Kevin Conroy will, once again, reprise his role as Batman for the conclusion of Rocksteady's Arkham trilogy. Batman: Arkham Knight is scheduled to be released October 18, 2014, for Xbox One, PlayStation 4 and PC.