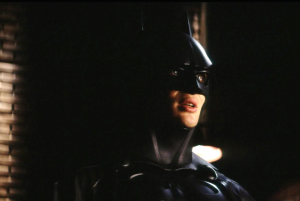 As part of the run-up to the Dark Knight Trilogy Ultimate Collector's Edition, due out tomorrow from Warner Bros., the studio have released another look behind the curtain at the creation of Batman Begins--a look, that is, at the audition of Cillian Murphy, who played Scarecrow. CBM found a screen grab, which we've cleaned up and reposted at left.

We can only assume it was 28 days later when he found out he didn't get the job.