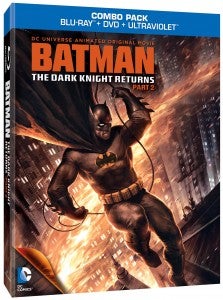 With its home video release just around the corner on January 29, 2013, details have emerged from Warner Brothers about the upcoming second installment of the DC Universe animated epic Batman: The Dark Knight Returns.

Based on the Frank Miller comic book miniseries of the same name, The Dark Knight Returns follows Batman as he comes out of retirement after years away and finds Gotham a more brutal and fractured place than ever. In the second half of the story, he's facing down The Joker, who has emerged from retirement for one last game of chess with his old opponent.

Many of the themes of this half of the story are the same ones you can see coming through in the currently-ongoing "Death of the Family" storyline in the Batman family of comics from DC Entertainment. The fact that Batman and The Joker are two sides of the same coin and that one cannot fully function without the other is a central theme in that story, and the premise of The Joker's return to crime in The Dark Knight Returns.

You can check out the full details below; the film will be available on DVD, Blu-ray and digital download January 29. In the meantime, you can read our review of the first installment.

Batman must battle old friends and foes on two fronts in the epic animated conclusion to Frank Miller’s masterpiece in Batman: The Dark Knight Returns, Part 2, the next entry in the popular, ongoing series of DC Universe Animated Original Movies. Produced by Warner Premiere, DC Entertainment and Warner Bros. Animation, the all-new, PG-13 rated film arrives January 29, 2013 from Warner Home Video as a Blu-ray™ Combo Pack ($24.98 SRP) and DVD ($19.98 SRP), On Demand and for Digital Download. The Blu-ray™ Combo Pack will include UltraViolet™*.

With Gotham City back under his watchful eye, and accompanied by able sidekick Robin, Batman continues to battle crime – but his resurgence awakens a far worse evil at Arkham Asylum: The Joker. In the meantime, Superman has been dispatched by the President to halt Batman’s unsanctioned reign by whatever means necessary. Between the Joker’s diabolical scheme to drag Batman to the darkest levels of insanity, and the Man of Steel’s seemingly invincible physical presence, the Dark Knight must confront adversaries and allies simultaneously while maintaining the peace in Gotham City.

“Batman: The Dark Knight Returns, Part 2 is epic animated filmmaking at its finest Crafted by an impressive team of filmmakers and voice talent alike it’s the perfect complement to the initial installment,” said Mary Ellen Thomas, Warner Home Video Vice President, Family & Animation and Partner Brands Marketing. “Just when you thought the story couldn’t become any more intense, the Joker and Superman arrive to up the ante – and Michael Emerson’s approach to the Joker is particularly chilling. This is a film no fan can do without.”