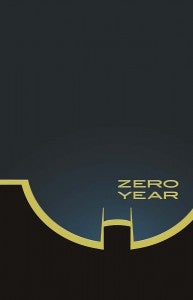 #21, out today, marks the start of Scott Snyder and Greg Capullo's epic Batman: The Zero Year story, which will reportedly take us clear through to Comic-Con next year before leading into a summer event at the end of it.

That's far in the future, though, and what Snyder really wants us to worry about in this issue is the past--specifically, the year before Superman showed up and the DC Universe was changed forever. The story begins "six years ago," in a version of Gotham that resembles No Man's Land (or The Dark Knight Rises), with the leader of the Red Hood Gang believing himself to have killed Batman and taken over the City. It's a wasteland--the issue begins with a child fishing out of a flooded subway tunnel, and then being jumped by gang members. 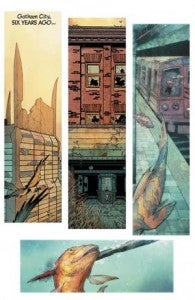 In fact, The Dark Knight Trilogy may be the most apt comparison for what Snyder is trying to do here. It seems as though, like what Geoff Johns just finished doing with Green Lantern, Snyder is building an ambitious backstory and mythology for the characters that will set the Snyderverse up as its own animal long after he's off the title. Like Christopher Nolan did, Snyder envisions a version of Gotham that plays by the rules he's setting for his own unique flavor of storytelling--and in reshaping the city and its history, Snyder is able to give color and flavor to the character's history that's hard to parallel if you're playing in somebody else's toybox.

Certainly we've seen bits of that, with the Court of Owls being established as a thing that's just always been there in Gotham--and with the Red Hood Gang being reinvented as a secret society, it will be interesting to see whether and how Snyder sets those two groups up to interact here. Obviously he's somewhat limited there, in that Batman can't find out about the existence of the Court of Owls or it messes around a bit with the first couple of Snyder/Capullo arcs...but it's hard to imagine the Court would allow someone else to snatch the kind of power over Gotham that the Red Hood Gang are illustrated to have here.

It certainly appears as though one of the central conceits of this series will be to set up a Joker/Riddler war, with Batman caught in the middle. Edward Nigma does appear in the episode, somewhat reminiscent of the Jim Carrey version that moviegoers will remember from Batman Forever. He works for Wayne Industries--a visionary oddball with a big office and a relationship with the CEO, who happens to be Bruce's uncle because in this story, it's he who had Bruce declared dead during his years away training, not Alfred. 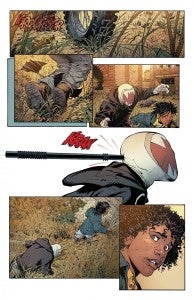 Philip Kane is a new face to the Kane family (Bruce Wayne's cousins, and the family from which Batwoman ultimately hails), and he's not a particularly friendly one. Having developed the company up during Bruce's absence working under advice from Nigma, he first sees Bruce's return as a blessing--his nephew, the public face of the family, is back!--but it's short-lived and ultimately we learn that the relationship between the two is less like family and more like that we saw between Bruce and William Earle, Rutger Hauer's character in Batman Begins.

The incorporation of elements that either are, or at least feel, familiar from the films has an interesting effect on the story; we've all seen Batman's origin retold so many times, and his "Year One" experience flashed back to in so many different ways, that to give a truly defnitive view of what Batman means in the New 52, it's arguable that aspects of other media will have to be considered. Comics fans sometimes get worked up about the addition of supporting characters and story concepts from film and TV, but Snyder does it subtly, maybe even subconsciously, and it's not intrusive. 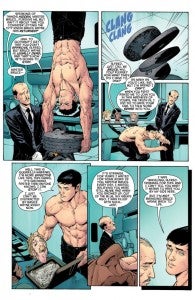 The dueling narratives--the one that goes back six years to a kind of Mad Max-inspired dystopian Gotham that features a purple-gloved, motorcycle-riding proto-Batman, and the one that takes place five months previous when Bruce Wayne has just returned and Batman is not yet created--don't interact in a way that yet makes sense to the reader, which leads to anxiety and raises the stakes of the story. That said, it's hard to imagine how to get from Point A to B believably, and how Gotham could bounce back from that rather bleak Point B by the start of the New 52.

The story itself is very promising, and Snyder does some impressive world-building, with the help of Capullo's pencils, which are characteristically impressive. He helps to create a Gotham that's familiar yet new; fresh and clean, yet broken and corrupt, and he makes it easier to swallow that this is the same Gotham we've been reading since the start of the New 52.

Which, ultimately, is key to making the story work. If Snyder's script has a weakness it's that the world he's building is at times difficult to reconcile with the Gotham we know. Even that's arguably a point in the comic's favor, though, as the New 52 hasn't been quite as "new" in some corners as it has in others and while Snyder and Capullo have succeeded admirably in keeping Batman fresh, theirs has stood alone in that somewhat, as the rest of the franchise has had a hard time choosing between the fresh, new hitmakers of the New 52 and remaining true to the tone and tenor of the long-established and best-selling Morrison status quo. With Morrison on the way out and Snyder making his boldest statement yet in Zero Year, it seems the time has come for a fuller passing of the torch.