This week, readers of the Batman family of titles were treated to a series of teases that there's something very disturbing undercover atop a silver tray--something that will change the course of the currently-ongoing "Death of the Family" storyline featuring The Joker. There's been a lot of speculation that any number of characters, including Jim Gordon, his ex-wife or even Batman's son Damian could die at the end of the story...but what is it that we might see under that cover? Quite a lot of fans seem convinced that it will be a severed head--something that might not actually fit under the dish as drawn by some of the artists (the trouble with a reveal like this is that not everyone draws "covered tray" exactly the same). Whose head? Well, that's anyone's guess and those same handful of characters are still more or less in play, in terms of the ones who would do enough damage to Batman's psyche to really alter the game. But, since he was kidnapped at the start of the story and hasn't yet reapppeared, a number of fans are expecting it to be the head of Alfred Pennyworth, Bruce Wayne's butler and surrogate father. There are a number of reasons it's likely not; the first of which is that I've been assured by someone who seemed confident and was likely (though not definitely) in a position to know that it isn't. There's also the whole "size of the tray" thing, along with the fact that Alfred is simply too valuable a commodity for DC to squander him this soon after the relaunch. 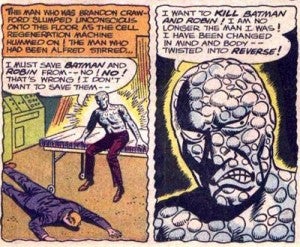 That said, it could be Alfred's face, separated from the head. That was the big, shocking reveal at the end of Detective Comics #1, with the full extent of The Joker's grotesque new look teased and teased as long as they could before revealing his face (which by then had the old one strapped on top of it, so there may yet be a final reveal to it). And while it wouldn't make a lot of sense to kill Alfred, it's possible that Snyder is interested in doing a New 52 reimagining of The Golden Age Outsider storyline, where Alfred was presumed dead, only to briefly become a villain, and then lose that appearance and forget those memories once he was "cured." What's the reason for thinking that could be the case? Nothing too strong, except that it's a possibility and that it would make more sense than many of the theories floating around out there. Also, a version of The Outsider appeared in Flashpoint, showing that there's some interest in keeping that trademark alive and keeping the character fresh in fans' memories. This could give Snyder plenty to work toward, setting up storylines for the future while providing a present-day problem for the Dark Knight if he's wrongly suspected of killing Alfred. Looking for the body could turn into deducing the answer to the Outsider mystery, could turn into saving his old friend. Again--all speculation, but given we know Batman is on the run, accused of murder, in the months following "Death of the Family," not entirely out of the question.

Batman's Death of the Family and the Rise of the Outsider