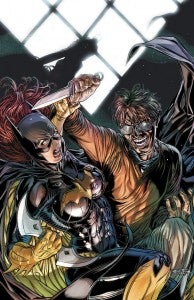 The Batman solicitations released today by DC Comics seem to point in an interesting direction: there's death, fallout and repercussions mentioned. You know who isn't mentioned, even though both of his kids are starring in an issue together that month? Gotham City Police Commissioner James Gordon.

Check out the solicitation information from Batgirl #17 and tell us this doesn't sound ominous:

• Barbara Gordon must deal with the fallout from “DEATH OF THE FAMILY” in this issue that will forever change her status quo in The New 52!

• What does James Gordon Jr. have planned for his sister, Batgirl?

Nothing else seems nearly as ominous by comparison; most of the rest of the Batman solicitations deal with the League of Smiles, another Sinestro Corps-style attempt to create an army around a hero's most recognizable nemesis.

There's an interesting intimation that Batman and the Red Hood will have cross words for one another, but one has to wonder whether that's just because Jason's well-documented hatred for the Joker could have led him to be too aggressive, not thoughtful enough, and put lives in jeopardy. In a story where Alfred's life hangs in the balance and Jim Gordon's fate seems in question, that could certainly set Batman off.

To that point, it could be that both Gordon and Alfred don't make it out of the story. The Joker hasn't been shy about targeting family members in the past, and while Sarah Essen's death in No Man's Land may not "count" anymore, it's already established that Barbara Gordon's injury in The Killing Joke is New 52 canon. And stripping any non-tights-wearing support system from Batman and company would certainly constitute the titular Death of the Family...

Batman's Death of the Family - Will They Kill Commissioner Gordon?