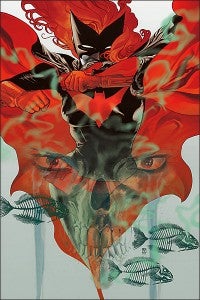 This particular series has been a long time coming! For fans of Kate Kane, the woman to wear the symbol of the bat on her chest under the guise of Batwoman, this solo series debut has been in the works for quite awhile. Originally announced over a year ago, the series has finally arrived as part of the new DCU. This book has not changed at all in terms of tone, art or character continuity, appearing untouched by the events of Flashpoint at this juncture. With artist and writer J.H. Williams III and colorist Dave Stewart being so involved with the character during her run in Detective Comics, that is no surprise. So now that her own, self-titled series is underway, how does it hold up under the scrutinizing eye I'm giving to all these first issues? Pretty darn well!

Batwoman concluded her first solo adventures in Gotham City by pursuing the murderous Alice and the Religion of Crime, who wanted her dead, believing her to be the key to some sort of religious ritual. She then battled several other psychos and dealt with her family, ex Renee Montoya and even Batman himself. She now contends with a mysterious female figure known as La Llorona, or the Weeping Woman, a supposed figure of urban folklore. La Llorona seems to have a fixation with children, as many have gone missing throughout Gotham recently. Several characters introduced before in Batwoman's world are back here, such as Kate's cousin Bette, Kate's father, as well as potential love interest Det. Maggie Sawyer. The nice thing about this is that those who are familiar with the series are immediately comfortable and aware of these relationships, but for new readers, the introductions are handled in a way that doesn't force exposition and character appearances.

Disturbing scenes occur, as more and more pieces about La Llorona are revealed, as well as the children's outcome. One of the more haunting pieces of the Batwoman premiere issue is the artwork, which both Willams handles with great flair and flow. The panels and layout of the pages are unique and weave the artwork into the narrative of the story, allowing for maximum information and storytelling. Williams and fellow writer W. Haden Blackman craft a tale that gives us a gritty, street level feeling to this character, something that Batman has had off and on, but not recently with the more "devil may care" attitude that Dick Grayson brought to the role for awhile. A character such as Batwoman gives that element in a way that establishes its own voice and legs. The series is a complex mystery that readers will look forward to unravelling. Grade: A+