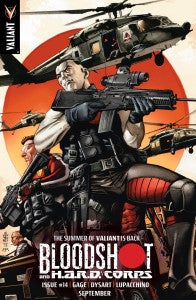 When Joshua Dysart and Christos Gage take over Bloodshot and the H.A.R.D. Corps in September, it will mark the first major creative shift, both in terms of a creative team and of the content of the title (formerly just Bloodshot prior to the events of Harbinger Wars) since Valiant Entertainment relaunched their superhero comics last summer.

It's a responsibility that Dysart takes seriously, as he told us in an interview to be published in full in the morning. Writing a book for a smaller publisher, and one on which there's only been one take and one creative team since it launched, the writer says it's incumbent upon he and Gage not just to write the best book they can, but to keep the previous iteration close to their hearts as well.

"You know, it's very much a part of our job," Dysart said. "You can be the next writer on Superman or Avengers and you've got a lot more freedom to go with your own take. It is part of our responsibility to take some of the energy, the dynamic and particularly the themes that Duane Swierczynski laid down and run with those."

"That is the energy that I think you feel when you read Valiant Comics," he added. "You feel the energy of all of us doing something for the first time, all of us trying to figure it out. Harbinger Wars was the first time that myself or Warren Simons had done a big crossover so while I'm sure there are things we would do differently now, I think there's an energy and a freshness happening there simply because we didn't know what the hell we were doing. 'Hey, kids, we have a barn. Let's put on a show.' So yes, obviously there's a great responsibility. This is the first creative changeover in a Valiant book--but I do believe that these challenges create energy inside the book and I do believe that's why our books have something going on in them that maybe a larger company has a more difficult time capturing."

Bloodshot and the H.A.R.D. Corps's Dysart: Our Responsibility to Honor Swierczynski's Work