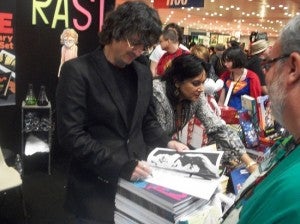 In a new interview with Paste Magazine, cartoonist Jeff Smith discussed the film adaptations of his two creator-owned comic book series, and the challenges of adapting his work.

"I like everybody involved," Smith said of director P.J. Hogan and writer Patrick Sean Smith, who have been hacking away at the Bone adaptation for more than six months now. "They’re all working very hard on it, but it’s becoming apparent to me that I write comics that are just incredibly hard to adapt into movies, so I don’t know. They’re still rewriting the scripts and it’s still in motion. They’re still trying to make it happen."

Bone ran for 55 issues between 1991 and 2004, and has gone on to become one of the most celebrated and best-selling comics of all time, including ten Eisner Awards and eleven Harveys. Both the series' color and black and white editions have become massive hits in the educational market, as well, in graphic novel format.

Smith adds of the film adaptation, "Everything I’ve seen I’ve thought was very good," he continued. "I like the director on a personal level, and I think his movies are very interesting and good. I'm just waiting for the studio to say they’re happy with the script and get it going. I know Animal Logic is chomping at the bit to get started."

RASL, though, his interdimensional art thief story that's currently ongoing, he says that one appears to be moving forward at a faster clip. That could be at least in part because the shorter duration and more episodic stories make it easier to adapt.

"They’re working like hell on it," he said. "I just got a new RASL script this weekend as a matter of fact, so I just read it and I know this weekend another Bone script is going to drop."