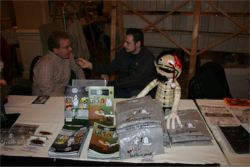 When most people in their youth saw characters such as the Wolf-Man, the Bride of Frankenstein and zombies on the silver screen, they probably saw fear and terror coupled with images of people fleeing to get away from these scary creatures. Writer and artist Bradd Parton saw the potential for a great comic strip set in Detroit.

“As a child and even as an adult, I was always a fan of the old Universal horror films and especially the ones that had anything to do with mixing horror and comedy, such as Abbott and Costello Meet Frankenstein”, Parton said. His interest and fascination with these characters and the blending of the distinct realms of horror and comedy became the web comic Gloomy Roomies. “The story really follows this group of monsters who live in the only monster-friendly apartment complex in America, which happens to be in Detroit, Michigan,” Parton said.

The comic, after some retooling in late 2008, is now updated three times a week, on Mondays, Wednesdays and Fridays, and started out following the adventures of young Francine and her zombie brother Gus as they escaped the harsh treatment of their parents, Frankenstein and his bride, by coming to America. The strip quickly expanded, adding a colorful cast of supporting characters from all aspects of supernatural realms, such as a werewolf building super and a ghost who aspires to be a rapper.

“The reaction to the series has been really positive,” said Parton, adding, “I’ve noticed lots of readers here in America, but it’s also developing in Germany, Australia and England. It seems that with each update I do to the series, an increase in traffic to the website occurs, which is very encouraging.”

Parton, based out of Laurens, South Carolina, has found several local shops willing to stock the first two print issues of his series, but a lot of promotion for the series comes from, “posting in forums and message boards, monster and horror sites and lots of word of mouth.” As his site and comic gain in popularity, there are some obstacles to promoting and being solely responsible for a product. “Getting it all done can be challenging, and there really aren’t that many chances to get to collaborate with the audience, but books, as a whole, are like that. Being digital does help though in raising the level of audience that’s out there for me to connect to,” Parton said.

Overall, as Parton continues to write and illustrate Gloomy Roomies, his objectives are deeply rooted in a quality product. “My strip is appropriate for all ages, and I don’t use any off-color language, and that’s important to me. I’m the sole editor and am accountable to that. My goal is to simply do the best book that I can.”

With a down-to-earth attitude about an otherworldly topic, it’s reasonable to say that Parton may find himself scaring up more and more readers as his strip continues to climb in popularity and appreciation. Visit the Gloomy Roomies website!!