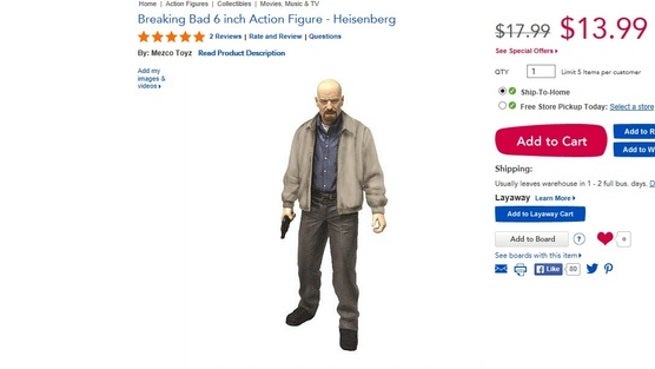 Fox News is reporting that Toy 'R' Us will pull Breaking Bad action figures from its store shelves.

"Let's just say, the action figures have taken an indefinite sabbatical," Toys R Us said in a statement.

We originally reported on this story earlier in the week, when the Change.org petition to have the figure removed, started by a Florida mom, began to gather steam. The petition now has over 8,000 signatures.

Watch the latest video at video.foxnews.com

Toys 'R' Us originally defended itself by pointing out the figures were marked for children over the age of 15, and saying they were only sold in the adult sections of their stores.

Toys R Us puts Breaking Bad toys on 'indefinite sabbatical.' Word on the street is that they were sent to Belize. Nicely played Florida Mom.

Bryan Cranston, the Breaking Bad stars on whose likeness one of the figures is based, chimed in with a humorous tweet, saying he was burning his Florida mom action figure in protest. In light of the banning, Cranston chimed in again with the above tweet.