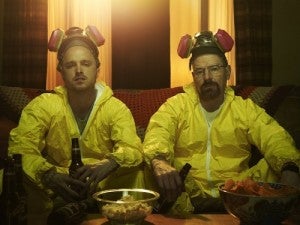 As part of the escalating war of words between cable network AMC and the DISH Network, who recently stopped carrying their channel amid a contract dispute, the network has announced that Sunday's San Diego Comic-Con International screening of the highly-anticipated Breaking Bad season premiere will be streamed live online for DISH subscribers.

Breaking Bad, one of the cable's most popular and well-reviewed shows, is entering its fifth and final season, which will begin in the fall. This weekend's screening will be the first look at the series ahead of its fall premiere date.

“Every cable, phone and satellite company other than DISH carries AMC and its popular programming, including Breaking Bad, The Walking Dead and Mad Men, in their basic package," said AMC in a statement. "AMC wants its loyal DISH viewers to experience the excitement of the “Breaking Bad” premiere at the same time as their friends and neighbors, and we want to give DISH customers an extra week to switch providers so they can enjoy the rest of the season.”

Beginning at 3 PM ET on Friday, July 13, DISH subscribers can register for access to the live stream at www.amctv.com/breakingbad4dish. The livestream will take place on Sunday at 10 p.m. EST.