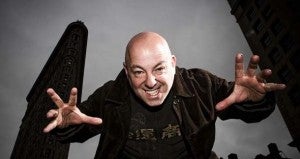 Superstar Marvel Comics scribe Brian Michael Bendis already has a ton of plates in the air, including the just-started Spider-Men miniseries and a hand in the Avengers vs. X-Men mega-event for Marvel.

Apparently, though, that's not quite enough to keep his mind from wandering once in a while, as the writer just tweeted that he's been working on something special on the side.

"[I] literally spent the entire week writing a GIGANTIC Marvel comic no one has asked me for or knows about," tweeted Bendis. "Pretty sure i'm losing it." He followed up with, "I honestly don't even know which editor I should show it to."

This could be a shot in the arm to the already fairly aggressive rumor mill surrounding Bendis' next project following the end of his run on the two Avengers titles he's currently working on. In addition to a lot of speculation--fueled in no small part by the presence of Thanos and the Guardians of the Galaxy in the writer's Avengers Assemble title--rumors surfaced earlier this week that Bendis would take over a pair of X-Men titles soon. In an interview last night with ComicBook.com, all he would say on the matter was that he was already writing the project, "which I can't talk about." You can see more from that interview tonight and Monday.