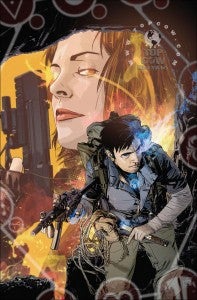 Top Cow is releasing an ambitious project over the next few months, one that will certainly be a staple of their summer lineup, and it all started with the recently released Broken Trinity: Pandora's Box #1, a project that continues the Broken Trinity work from before with the promise of globetrotting adventure and the feel of an Indiana Jones story, as a search for precious artifacts, beginning with the eponymous Pandora's Box, begins here. For fans and readers of the Broken Trinity series, this first issue will quickly pick up and reintroduce you to the world of the bearers of the Ember Stone and the Glacier Stone. New readers may find the suddenness of the issue a bit unclear, but overall the story has potential to make an impact, even though a sense of immediacy and characters doesn't always feel developed. Bryan Edward Hill and Rob Levin handle the writing duties here, and while they do a nice job of trying to initiate the new reader into the existing universe by offering a brief glance back at the history of Glori Silver, the bearer of the mystic Ember Stone and Michael Finn, the wielder of the Glacier Stone, there's a definite sense of history present in the first few pages that might ring hollow for new readers; although, those familiar with the series will appreciate the quick transition into the action of the piece, where the issue does find its best glimpses of what we might be able to expect. Their eternal struggle is depicted richly by Alessandro Vitti's drawings and Sunny Gho's colors, which both give the feeling of a rich tapestry. The battle between these two forces will have to wait, as a threat to the entire world begins to emerge, as the Cult of Adam believes that it must find one of the most powerful items in the world, Pandora's Box, in order to carry out their destiny. There's quick pacing here to get the introductory issue going, but the reader doesn't get a sense of this cult's personality, drive or motivation, even as we seem them continue to cross the globe on the trail of artifacts they think will help them find their way to the box. What follows that is a bit of exploration of Finn's character, as the power within him causes mistrust and anger with potential teachers, all the while he anticipates a showdown with Glori. She is also not without her demons, and again it's the glimpses into the power and the personal burden of that might that makes this first issue work. Another appearance by the Cult of Adam with Glori's guide doesn't feel finished as well, and the two sides realize that they are not the enemy in this case. The issue begins to find sturdier footing as it concludes, with Finn battling with some intriguing characters as an unlikely presence darkens his door at the end. The set-up for issue two looks interesting, and the overall issue itself has glimpses of true power, but the potential to not hook new readers is present here, even though the visuals help to carry some holes in character development and our understanding of this fanatical cult. Glori and Finn make interesting characters, but pieces of the issue feel more like formality than true exploration of new territory. Here's hoping that readers get more openings in Pandora's Box #2.