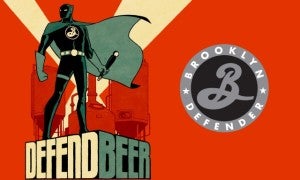 The beer will be introduced at a special party on September 21 and then make its way to select bars and restaurants. New York Comic Con takes place October 10-13 at the Javits Center.

“New York Comic Con is a celebration of all things pop culture and what better way to celebrate than with a beer. The Brooklyn Brewery has created a true gift for fans and has lined up some events and partnerships that will bring the magic of NYCC all throughout the city,” said Lance Fensterman, global vice president ReedPOP.

Garrett Oliver, Brewmaster of Brooklyn Brewery said, “As a New York City native who grew up on 70s comics and later edited a science fiction magazine, getting to make the Brooklyn Defender for New York Comic Con is a massive honor for my inner geek.”