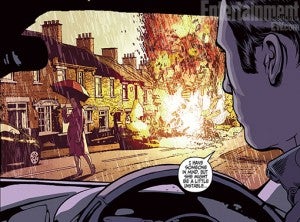 The new Burn Notice digital graphic novel, which runs in installments every Thursday with its first chapter having gone live earlier today, will delve into the history of Michael Westen and Fiona Glennane, the couple at the center of the hit USA Network TV series. The story, titled Burn Notice: First Contact, will be the third such publishing event for DC Entertainment and USA, but will be the first time the show's writers (and showrunner Matt Nix) have told an extended story set in the early days of the pair's relationship. "In many ways Michael & Fiona's relationship is one of the most compelling stories of the Burn Notice mythology. With the stakes of their relationship as high as they are in season six, I think this is the perfect time to tell how that story began," said Matt Nix, creator and executive producer of the show and one of the writers on the comics. "It's a tale I've wanted to tell for a long time and I think the comic book is a really great way to do that. I can't wait to share it with fans." At the start of Burn Notice, Michael and Fiona had already had a tough breakup, leading to a boatload of unresolved sexual tension in the early days of the show. As the relationship between them has become more a centerpiece of the series, they still haven't realliy dont a lot of digging into what shaped it in the beginning. "Using the digital realm to reveal a prequel storyline to our fans enables us to broaden our creative canvas by exploring the past and showing our characters in destinations outside of the weekly Miami setting," said Jesse Redniss, SVP, digital, USA, in a press release. "We are continuing our work with innovative partners to create best-in-class transmedia experiences to involve our fans more deeply across multiple platforms." It's also more interactive than previous iterations of the Burn Notice comics have been, with behind-the-scenes features geared toward fans of both the comics and the TV series. Says a joint press release from the two companies:

"BURN NOTICE: First Contact offers fans multiple ways to engage with the storyline, characters, and creative elements, which include custom covers throughout the season. As with the first two volumes, DC Entertainment's artist Tony Shasteen is returning as lead artist. The mobile app, created in conjunction with Panelfly, powers exclusive parallax covers that allow fans to see the cover art shift and move as they tilt their devices. Furthermore, each chapter's art can be "peeled back" to reveal all three layers of pencil sketches, inks, and colors. Fans on the app can also connect to Burn Wire for the latest show news and video, and to Character Chatter, USA's real-time destination for socializing around BURN NOTICE."

The series started its sixth season earlier this week on USA, focusing around Michael's attempts to free Fiona from prison after she surrendered herself on terrorism charges at the end of the fifth season premiere. It airs Thursdays at 9 p.m. (8 p.m. Central) on USA.