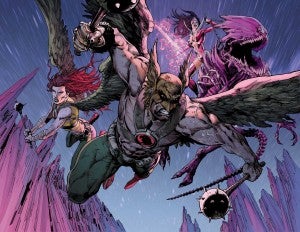 In comics, some characters just come with a ton of baggage. Over the course of the last seventy-five years or so,  many of the characters have found themselves in need of serious rehab and, as often as not, attempts at fixing them have only made the problems worse, entrenched the problems deeper into the root of the character or focused unwanted attention on the fact that there was a problem without actually fixing it. And no, this isn't about the New 52 or Man of Steel or any other number of reboots and retcons designed to make Superman or Spider-Man more accessible or fresh or whatever. Those characters are based on powerful, iconic concepts that will almost always recover from the damage done to them by a single bad creative choice or even a decade of poor storytelling. They've got movies and cartoons to help rehab the characters' image with outsiders and kids, developing new groups of potential fans who only realize that the comics are troubled after they've started to buy. This is more about the Hawkmen, Aquamen and Stilt-Men of the world. The characters who, if there is any awareness at all that they exist outside of the mainstream comics community, it's as a punchline. Hell, Aquaman was a running gag for more or less the entire run of HBO's hit show Entourage, which was on pay cable but still reached more eyes in its seven-year run than Aquaman has probably in the last fifteen years or more. Of course, Aquaman has been successfully rehabbed by Geoff Johns, DC's chief creative officer who basically spends his life finding damaged characters to restore to their former glory and then some. Having salvaged the tarnished reputation of once-and-future Green Lantern Hal Jordan, he proceeded to reinvigorate Hawkman and Booster Gold before making Barry Allen--who had been dead for twenty-five years--not only into The Flash again but into one of the top-selling titles at DC. Booster Gold does seem to be the exception that proves the rule in terms of second- or third-tier heroes, though. He's certainly better off now than he was when Johns and the rest of the 52 crew found him, but many of the other Justice League International characters who were taken up over the last few years have seen backwards motion. Blue Beetle only became a viable property again after they killed off the previous character and started from scratch; Enlongated man was dumped in the crapper at the end of 52, where he presumably met up with The Question (who got the Ted Kord treatment in that same series) for a drink. Hawkman straddles the line between being a top-tier character (because of his time on Super Friends and Justice League Unlimited, which lent him visibility to a wide audience) and an also-ran (because of years of poor storytelling, a confusing backstory and actually being periodically taken off the board when the whole thing got too messy to handle), and the success of his relaunch has been questionable. As long as Johns was directly handling the character, it seemed to work and fans remained pretty enthusiastic, but the series didn't last long after he left and subsequent attempts to make the character seem relevant again, both by Johns and other writers during the Blackest Night/Brightest Day events and more, felt forced and ultimately unsuccessful. At the end of the day, it seems there's no clear answer for this one; no character is completely beyond at least temporary rehab (look at legacy characters like Starman and Manhunter for an idea of how it can work), but for many, the "fix" only lasts as long as that one, great creator or creative team is attached, followed by another long fallow period in the character's history. It's almost enough to question whether ongoing, monthly serial storytelling is the best forum for some of these characters--but that's another story for another day.

Can a Comic Book Character Be Damaged Beyond Repair?