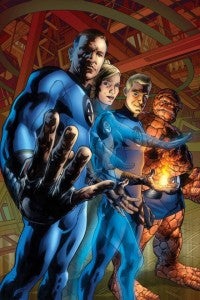 Marvel's first family has taken many beatings over the years. They've faced down Doctor Doom, the Frightful Four, Klaw, the Mad Thinker, Namor and a host of others in their over forty year history, and while the lineup has changed some over the years, most recently when Storm and Black Panther filled in for Sue and Reed, the original adventurers have remained the core team, and one of Marvel's most recognizable and exciting franchises, always central to some of Marvel's biggest story arcs over the years. Until recently. Even though the events of Secret Invasion and Dark Reign have impacted both the Mighty and New Avengers teams the most, it would stand to reason that there would be more involvement from one of Marvel's most prominent, and powerful, teams in all of this. While there is currently a four-issue limited series centering around the FF and Dark Reign, there's been an almost complete disregard for it during the current run of writer Mark Millar. Instead, we've been treated to stories focusing on time travel with future versions of Sue Richards and Doctor Doom, a strange adventure to Scotland to face a monster and a story involving the creation of an Earth where this world's inhabitants will go once this one goes from endangered to extinct. It seems that the last time the Fantastic Four had a significant story was shortly after the events of Civil War, when a divided Sue and Reed reunited and then took a break to work on their marriage. Ever since the conclusion of the Frightful Four story arc, shortly after these events, under the pen of Dwayne McDuffie, has a Fantastic Four story had a sense of action, urgency and genuine gravity to it. That's been missing in the most recent issues of FF, that urgency. Most of the plots have seemed very ho-hum, even the much hyped "death" of the Invisible Woman. The Fantastic Four has quickly become disappointing and, I hate to say it, irrelevant to the rest of the Marvel universe. Even a good portion of the art has seemed wanting, with the FF looking about 15 years younger than they've appeared up to this point. The current story line about the Marquis of Death has felt strained, a bit unclear in spots, and everything apparently leads up to the double-sized next issue, number 569, which will arrive in mid-August. Will the final issue of this arc, and the end of Millar's run on the series, make up for what has felt like a stalled progression over the past few months? We'll see. The arrival of Jonathan Hickman and Dale Eaglesham to the series beginning with issue 570 has some promise, and Marvel has been a bit mum on what exactly we can expect to see with this series, but hopefully we can expect a return to relevance for our adventurers. Things haven't felt right in the Baxter Building for awhile now, and maybe the arrival of a new creative team will mean greater things, and a new page, in the history of this storied family. Maybe they can help thrust the team back into their rightful place in the Marvel universe.

Can Someone Please Save the Fantastic Four?!