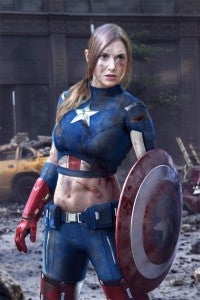 The actress, who has been photoshopped into a gender-swapped Avengers photo essay that has attracted a lot of fan attention online, joked with MTV in an interview embedded below that injuring the Avengers star is clearly her path to Marvel movie stardom.

"Many, many a person have sent this to me on Twitter, actually," Brie said. "I'm impressed with the abs. I'm down with it. Are you kidding? I love it. I'm going to go break Chris Evans' kneecap, because obviously the second-best person to step into that role is me."

Somewhat more seriously, the actress was asked about taking a role in the film as Captain America's love interest in next year's sequel, which is set to start filming in March. She's one of the names that keeps coming up in rumors and "scoops" from news and gossip sites, since her friends Joe and Anthony Russo took the job as directors of the film.

The Second Wave of Marvel movies has made "fresh take" the name of the game; excepting Joss Whedon, who will return for 2015's Avengers 2, no director is working on the sequel to his own Phase One movies. Iron Man and Iron Man 2 director Jon Favreau is out in favor of Kiss Kiss Bang Bang director Shane Black, while the Russos take over from Joe Johnston and Alan Taylor replaces Kenneth Branagh on Thor: The Dark World.

“When you first walk onto the set, it is strange to see all my friends and my cast members there. But Shane [Black] is someone who I’ve known for a while and Robert [Downey Jr.] knows for a very long time and I’ve done two, back-to-back,” said Favreau during a recent interview. “But I have to say, I’ve had so much fun and Shane’s doing such a fantastic job. And I’m sort of getting used to the idea, having watched Robert onscreen in The Avengers and having just been an executive producer on that, not directing. I’ve become comfortable with it....So it’s more like being a proud grandfather where you get to play with the baby but you don’t have to change the diapers.”