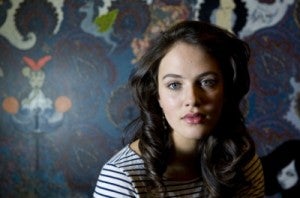 It's getting increasingly harder to believe reports that such-and-such a beautiful young woman is "the frontrunner to play Sharon Carter, Agent 13 of S.H.I.E.L.D. and potential love interest to Steve Rogers in Captain America: The Winter Soldier.

Each new set of auditions that Marvel calls in gets reported, along with one name in the list (Anna Kendrick, Alison Brie, Mary Elizabeth Winstead) who is supposedly the studio's first choice--and so far each group of names, and each frontrunner, has faded from memory as the next came in.

With the film set to begin shooting in just a few months, though (Evans said March), one of these days the rumors will have to be true--and at present the rumors are swirling around Jessica Brown Findlay, late of Downton Abbey, who The Express says looks to be the current choice to play the character.

Sharon Carter is, in the comics, the niece of Peggy Carter, Captain America's girlfriend from the first movie and arguably the most popular Marvel leading lady with the fans. Due to the character's World War II connections, it's likely they'll have to shift her another generation away from Sharon, which could be good in terms of managing the "ick" factor of Cap dating Peggy's proxy.

Peggy, for the record, is still alive and well and living in London, according to S.H.I.E.L.D. files seen in a deleted scene from Joss Whedon's The Avengers. That could, of course, jive with her descendant having an English accent.

The article says that there are currently four other actresses still being considered for the role: Emelia Clarke (Game Of Thrones), Teresa Palmer (I Am Number Four), Imogen Poots (28 Weeks Later) and Alison Brie (Community). Both Game of Thrones and Community have direct lines to Marvel Studios these days, with Alan Taylor (Game of Thrones) directing Thor: The Dark World and Community regulars Joe and Anthony Russo helming Captain America: The Winter Soldier.