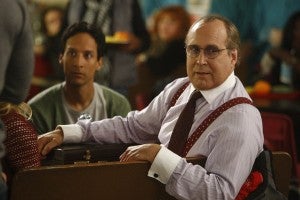 fans: We've parted ways with our closest, oldest, craziest, most racist, oldest, elderly crazy friend. And he's not coming back.

Months after having admitted to The Huffington Post that it was a mistake to take the job in the first place, comedy icon Chevy Chase is leaving NBC's fan-favorite sitcom.

“I just sort of hung around because I have three daughters and a wife, and I figured out I might as well make some bread, every week, so I can take care of them in the way they want," Chase said in an interview in September. "The hours are hideous, and it’s still a sitcom on television, which is probably the lowest form of television.”

TVLine reports that the star and the showrunners have "confirmed that Chase and producers have come to a mutual agreement that finds the comedy vet departing the cult NBC comedy effective immediately."

According to a linked report, Chase will appear in the bulk of season four's thirteen episodes, although his immediate departure means that the final one or two episodes yet to be filmed will not feature Pierce Hawthorne.

When showrunner Dan Harmon was fired at the end of last season, there was some speculation that the network had "picked" Chase over Harmon after the pair had a series of high-profile confrontations. The two have had nothing but kind words for each other since, and Harmon has confessed that if he were a Sony executive, he would have fired Dan Harmon, too, identifying himself as a perfectionist who's always behind deadlines and difficult to work with.

Last month, Chase reportedly had a blow-up on set when he found dialogue written for his character to be offensive. Chase, whose own views on race are diametrically opposed from his character's, apparently finds the tendency to write him as a crazy, racist old man offensive, and reportedly blew up, saying that the logical extension of his character arc is that they would have him using racial slurs soon.

What this means for the relative odds of a fifth season of Community, let alone a sixth season and possibly a movie, remains unclear.