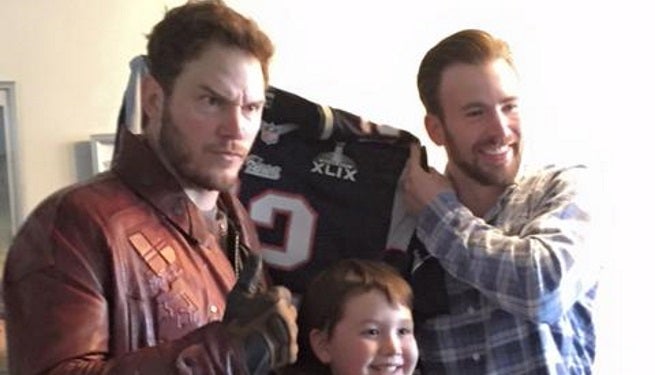 Chris Pratt fulfilled his end of the Twitter-Bowl bet by visiting Christopher's Haven in Boston in character as Star-Lord.

Pratt, a Seattle Seahawks fan, made a bet with Chris Evans over the Super Bowl. With his team on the losing end, Pratt was indebted to Evans to visit a charitable organization of Evans' choosing.

Pratt posted photos from the visit to his Facebook page, which you can see embedded below.

Evans joined Pratt at the event, as seen in the photo below:

The kids had a MARVELous visit this morning with #CaptainAmerica and #Starlord pic.twitter.com/chPtwk0bR6

Being a good sport, Evans has agreed to visit Seattle Children's Hospital as Captain America, despite having won the initial Twitter-Bowl bet.