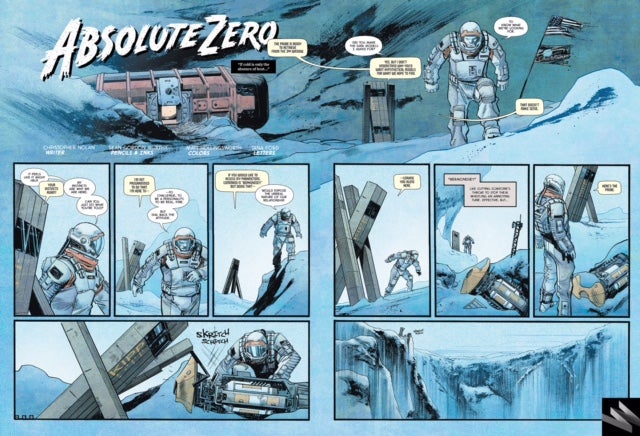 In what can only be described as the greatest marriage across fandom, Christopher Nolan has teamed up with Eisner Award-winning artist Sean Murphy for an Interstellar prequel comic.

In fact, Nolan hand-picked the illustrator behind The Wake, Punk Rock Jesus, Batman, and more to bring his tale to life, Wired's Deputy Editor Robert Capps told Comicbook.com The party doesn't end there. The eight-page comic is just the start of Christopher Nolan's presence throughout the December issue. Nolan served as the magazine's guest editor, inserting his own unique brand of visual storytelling into the magazine for what Capps called a convention-breaking issue. Just to give you an idea: The issue isn't broken down into typical magazine sections, but "dimensions" that honor Chris Nolan's filmography of spacetime and dimensional exploration.

You can check out the full comic below, and read our full interview with Capps, who speaks at length on what it was like to work with Christopher Nolan.

To get things started, I was wondering if you could take us back to square one with the project. What made you think that Chris Nolan was the right choice for a guest editor, and how did things play out from there?

Very serendipitously, actually. We had been looking around for a guest editor for some time, and Chris Nolan's name had come up a couple of times. We knew we really wanted to cover Interstellar, so I was particularly eager to do this, because even in an office full of Christopher Nolan fans, I am the fanboy. I was just crazy about Inception, loved the Dark Knight trilogy and Memento. We went out to the publicist and the studio's publicist and his publicists, and said that we would love for him to guest-edit. They came back and said Chris was too busy. He's famously not into doing press. He doesn't like pictures of him taken, and he doesn't like the story to be about him. He likes them to be about his movies. So they said no a bunch of times, and they said that we couldn't even do a story about him. Then one day just a few months ago, Scott Dadich, our Editor-In-Chief, came into his office and there was a Post-It on his desk that said "Christopher Nolan called." And apparently Christopher Nolan, unbeknownst to us, was a Wired fan and asked his Interstellar team what they were doing with Wired. And they said, "Well, we said no to them. And Chris said, "Well, let's undo that." They called us back, but we already had our November issue done, and our lineup was set for the December issue. Everything was set to go. We said that we really wanted him to guest edit the issue, and if Chris could guest-edit, then we would throw out everything we had for him and start fresh with only two and a half months to go. Lucky for us, it fell into a gap for him between Interstellar and being completed and the real publicity work that needs to come with a premiere. He had some downtime so he said, "Sure, lets go for it." So then it was all hands on deck, a mad scramble, to come up with a theme, articles, and artwork, and then flying down there a couple of times to meet and talk with him. That's how it happened (laughs).

Wow. So how did Chris Nolan specifically contribute to the issue as Guest Editor? Where did he plug himself into the editorial process?
We started by talking to him about what the magazine should be like from the ground-up. We start with a theme and a mission for the issue. We came up with a theme that seemed to match Interstellar, and seemed to be really interesting subject matter for Wired readers about spacetime and multiple dimensions. So it really tied into Interstellar, but his films often involve shifting perspectives and not being able to understand someone else's perspective from where you are. You think of it as people coming in from different dimensions. He plays with time a lot in his films, in terms of doing non-linear narratives and having time move at different rates for different people. And he's also a big fan of architecture and a big fan of space both in terms of spatial relationships and space as in outer space. It allowed us some play. He has some things that he wants to talk about. One of his inspirations for Interstellar was The Right Stuff, and he was going on about how he had just re-watched it and how it was great. We realized that no one had ever done an oral history of The Right Stuff, so we did that for the issue. Those sort of ideas generate out of those types of conversations. Everyone was super eager to do it, because everyone is a big fan of Chris. And Chris is a filmmaker, so he thinks very visually. We talked to him about visual sources. He just gives us images, like "Oh, I like this type of image." He showed us images that he liked that would set the issue's tone. He really dug into the issue's visual elements, like typeface and photographers. That's a big part of creating a print magazine. It's not just words, it's a whole experience with a visual theme and a visual language. It all comes together to make a unique expereince. So he had a lot to say about that. And then we took all the input we received from him and put them into story ideas. We took those and put them through our machine, which is our editorial process including our writer, contributors and editors. We came up with a long list of stories, we came up with some structural ideas for the entire issue, and go away for about a week and just generate a massive idea bomb. Then, we went back to Chris and give him the idea bomb, and pick through what he likes. And then we go away again and put together a "rough cut" of the issue and bring it back to Chris, which he goes over again. It's this process of him supplying a bunch of ideas, us going away and coming up with more ideas, and then this process of him supplying feedback at a bunch of different touchpoints. He was actually pretty hands-on as a guest editor, in that he came up to San Fransisco a couple of times. And we went down to LA a few times. So it was really fun. He was very generous. For a guy of his statures, he's one of the biggest and best filmmakers working today. And to have someone who's just down to Earth and genuine and extremely courteous was great. There was none of that Hollywood air that you might fear of someone who's hit extremely lofty level of success.

Out of all those articles and projects that Chris helped design, where are his fingerprints the most visible?
Chris actually wrote a comic for us that is penned by Sean Gordon Murphy. Sean did the "Hellblazer" series, Star Trek, and Batman, and was an Eisner-Award winner for "The Wake." We did this with J.J. too, where we invited Nolan to write something. So he took a chunk of Interstellar that happens off-screen, The Lazarus Mission. He took a small story, a vignette, of those missions that were clearly already in his head to tell Interstellar's story. So we have a six-page comic that Chris actually wrote the entire script for. Then we brought him different comic book artists. He really liked Sean's style, so we brought Sean to him and let them collaborate. Murphy's inker, fellow Eisner-winner Matt Hollingsworth, also collaborated on the story. So they all worked to gather to get his comic that related to Interstellar, but was not something that happened in the actual movie. It's going to be an extreme treat for fans of Christopher Nolan, and fans of Wired, and fans of comics. He also wrote an essay on why he chose the issue's themes. We have a big interview with a physicist named Kipp Thorne, who's a world-renowned astro-physicist. He's a Stephen Hawking-type guy. And they have a very deep-ranging and mathematical that gets into the physics of black holes and worm holes and all sorts of stuff that's in the issue. That was really amazing to watch. Having worked on the movie together, they have a remarkable rapport. To watch them go down the rabbit hole together was really interesting.

And for you personally as an editor, what project within the issue are you the most proud of or excited for?
The issue is broken down into five dimensions. So basically, we threw out the entire December issue we had when Chris came on. We took apart everything. And I don't think you've seen anything in a magazine that's structured like this. It exists as this whole piece that speaks to itself in a bunch of different ways across dimensions. It's definitely weird (laughs). It's definitely cool, but the way that he helped us break conventions. To be able to speak in that physical form is a little under appreciated these days. But to be able to work on a whole product is that is unified in theme and unified in look and feel, and then structured in this slightly weird way that might not work for everyone, to be honest, but was such an adventure, was amazing. So really, the whole issue was exciting to me.

Are any other Chris Nolan films reflected in this issue, or is it just Interstellar?
It's heavy on the spacetime and multiple dimensions, but we tried to go across all of his films thematically. We thematically talk about all of his films. We talked to Nathan Crowley, who's been Chris' head of production design since Insomnia. But we dug way back. The entire staff watched all of his movies again and crafted them in somehow. So the first "dimension" in the magazine is really focused on Interstellar, but then it gets more abstract and complicated from there. So it will seem Interstellar heavy, but hopefully we captured the spirit that Chris carries in all of his movies.

Sounds like quite the experience. So, now that Chris has played in your world of magazines, how would you play in his world of films? If you could go back in time and plug yourself into the production of a Chris Nolan film, which one would it be?
Inception is the big one for me. Personally, that movie was revelatory for me. I remember being so blown away by the scope and ambition of it that I came back to work the next day with this weird feeling, where I went, "I want to be better at my job." Chris did this hugely ambitious thing and pulled it off with such finesse, it made me wish that I was as good at my job as Chris Nolan was as his. So it was this weird personally inspiring film. It just connected with me. So if I could have had a hand or helped Chris Nolan in any way, it would have been for that movie.

Awesome. Is there anything else that you wanted to mention?

Just to reiterate for people who haven't met him, he such a charming, nice, generous and classy guy. Having worked with people in Hollywood that are not even on his level, the guy was just gregarious and fun to talk to and super smart. It was just a pleasure to work with him. I don't mean to fawn over him too badly (laughs), but I was surprised by that as a fan. He was everything you'd want him to be.

The December issue of Wired is now available digitally, and will hit newsstands on November 25th .