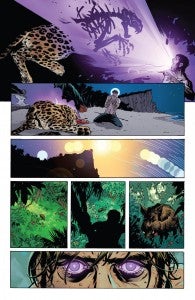 In a series of interviews today, Chronicle writer Max Landis (best known to comic book fans as the guy who did that irreverent, bizarre and sometimes hilarious Death of Superman video) revealed that his upcoming Action Comics back-up features, which begin with tomorrow's Annual #1, will be reintroducing The Atomic Skull to the world of the New 52.

The iconic Superman villain, who recently appeared in the animated feature film Superman vs. The Elite, had not yet appeared since the Flashpoint reboot.

The choice to depict a character who's got a connection to B movies makes perfect sense when you're talking to a screenwriter, right? Landis explained his philosophy on the character to Comic Vine:

"When I was looking up villains I wanted to use, Atomic Skull jumped to mind. There's something, to me, terrifically creepy about him. Be it the version of the character that existed before this story or hopefully the version of the character that I've created. Just the idea of this scientist, with the image of the burning skull…you know you can talk about Ghost Rider but that's sort of more down the line of bad ass biker imagery.

"The Atomic Skull…there's something almost creepy and sinister about it. I thought, wouldn't it be fun to tell this story kind of like a ghost story? You get some pieces at the beginning and then you slowly unearth the rest of the story as you go. When you're a screenwriter, you have to really write out things and think about how they would be shot. You have to think about your budget restrictions. You have to think about the actors, could an actor pull off this dialogue? I wanted to let the story be an exercise in not screenwriting. I wanted to try to work a different muscle in my brain, to tell a story just with pictures."