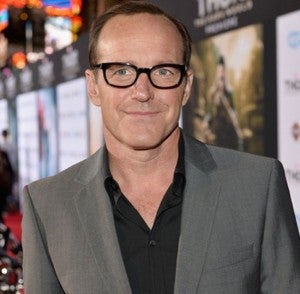 Clark Gregg has starred in a number of high-profile feature films before they moved him over to Marvel's Agents of S.H.I.E.L.D., where he's a network TV lead.

Was there ever a temptation to steal props from the set and bring home a piece of Marvel history? Especially for somebody who self-identifies as a comic book fan?

"I grew up watching the Spider-Man animated show so when they said, 'Do you want to do Principal Coulson’s voice in the Ultimate Spider-Man cartoon?' I was like, 'Yes! Yes, yes, yes, yes. Yes I do! Don’t audition anybody, I want to do that.' And I thought that to whatever extent Coulson would appear in the comics would be in the tie-in comics. And I’ve been on the road but I’ve finally just had the chance to get a look at the remarkably younger, handsomer Coulson that’s appearing in Battle Scars," Gregg enthused when we asked him about being a part of the larger Marvel Universe. "That was a really big day for me, and that’s the part of this thing that I think the is the reason that a lot of people are tuning into this that aren’t necessarily comic book geeks or who don’t go to Comic Con: To whatever extent this was the plan, Marvel has done these origin movies–which you know, if they didn’t work there never would have been an Avengers. I think if even one of them had been a big bomb, I don’t think they ever would have given them the money to make The Avengers. But they pulled it off and they got all these people invested in these characters and feeling kind of like new fanboys and fangirls, who are now going the other way and starting to buy some comics."

So a fanboy like that must have some cool swag from the sets, huh?

Well,  he shows off some of his collection on the new episode of Comedy Bang! Bang! Check it out below.