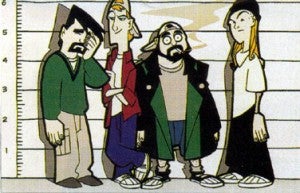 Kevin Smith, the filmmaker behind Clerks and Dogma, has a new book out this week and has been making the rounds this week, doing book signings and podcast appearances at an even higher pace than usual. But it's on Twitter that he's surprised fans by announcing that he and the revamped Miramax are working together to make new Clerks cartoons a reality in 2013. When a fan complimented the short-lived, fan-favorite series (which ran on ABC in 2000) on Twitter today, Smith responded, "Miramax 2.0 and I are hoping to give you new eps weekly next year." Miramax, founded in 1979 by Bob and Harvey Weinstein and then acquired by Disney in the 1990s, was recently sold to private investors. After the Weinsteins left in 2005 to form their own company, Disney had trouble making Miramax a successful imprint and eventually decided to jettison the brand. Smith himself played a role in the Weinsteins' departure--his 1999 film Dogma was one of a handful of high-profile projects that brought the brothers into conflict with Disney when the studio refused to distribute the film, citing objections from religious groups. That film, as well as Fahrenheit 9/11, which had similar problems at Disney, ended up being distributed by Lions Gate. Shortly thereafter, the Weinsteins left Disney/Miramax and within a couple of years, when Disney stopped actively using the name, the brothers made an unsuccessful bid to buy it back. When the studio instead sold it to a group of investors in 2011, the Weinsteins struck a deal to co-release sequels to some of their old work together, and Clerks was one of the franchise names mentioned. While it's unclear what network might run a new Clerks animated series, or whether it would even run on television versus being a web-only series akin to Syfy's announced Battlestar Galactica prequel, it's worth noting that Smith has a new presence on TV these days in the form of AMC's Comic Book Men.