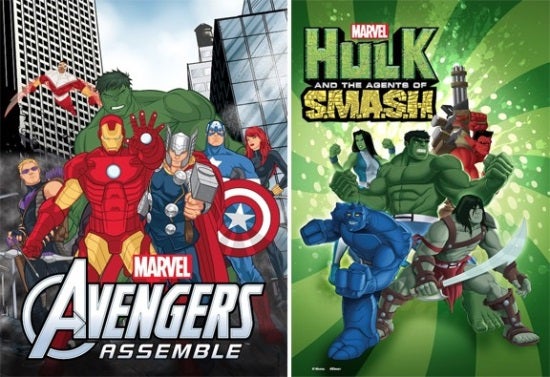 Marvel and Disney XD have released previews for this week's all-new episodes of "Avengers Assemble" and "Hulk and the Agents of S.M.A.S.H." The Avengers take on an alliance of powerful villains – including Dracula, the Red Skull, and M.O.D.O.K. – in "By the Numbers," while the Agents of S.M.A.S.H. deal with mystical threats in "Stranger in a Strange Land." You can check out the previews embedded below. Both shows air Sunday mornings on Disney XD.

BIG HEROES! BIG VILLAINS! AND BIGGER ADVENTURES…this week Share Your Universe this Sunday (8am/7c) with a brand new episodes of Marvel's Avengers Assemble and Marvel's Hulk and the Agents of S.M.A.S.H. inside the Marvel Universe on Disney XD.

Marvel's Avengers Assemble.  - "By The Numbers" The Avengers and the Cabal have a huge confrontation that leaves the team forever changed. Tony learns that – no matter how accurate they may be – you can't trust "the stats" every time.  There's no substitute for human intuition.

Marvel's Hulk and the Agents of S.M.A.S.H. - "Stranger In A Strange Land" To help the aspiring magician, A-Bomb get a lesson in hard work. Hulk puts him under the tutelage of the Sorcerer Supreme Dr. Strange – but when the dreaded Dormammu abducts his teacher, A-Bomb has to use what he learned to save Earth!

Clips From This Week's Episodes Of Avengers Assemble And Hulk And The Agents Of S.M.A.S.H.