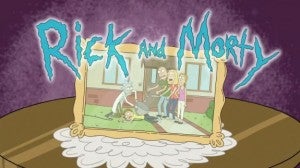 Cartoon Network's [adult swim] label has picked up Rick & Morty, a half-hour, animated sitcom from Dan Harmon, for a series order, reports Deadline. It is expected to debut in 2014. The series is kind of an odd couple comedy, following the exploits of a genius inventor and his dim-witted grandson, which (after a few familial twists and turns) is a strategy that's worked pretty well over the years on Futurama. It was announced at the network's upfronts earlier in the year along with a Harold & Kumar pilot and a number of other projects, but this is the first one with any news. Harmon, who was ousted as showrunner on NBC's Community at the end of last season, also has sitcoms set up with Fox and CBS right now. Community's fourth season, and its first under new showrunners, was recently delayed indefinitely but is widely expected to air on NBC starting in the spring.