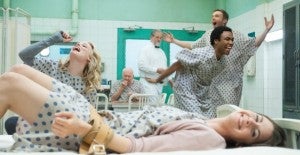 Community, the fan-favorite but ratings-challenged NBC comedy from Sony Pictures Television, surprised observers last night at the Critics Choice TV Awards, when it beat out heavy favorite Modern Family for the Best Comedy Series Award. "I want to thank Dan Harmon, who created the greatest show on television," Community star Joel McHale is quoted as saying in a story at Deadline. Harmon, of course, was recently ousted as the showrunner of the series he created. He took to Twitter to congratulate the cast and crew of Community and lament that he wasn't invited to the awards. Sony and NBC, meanwhile, are looking forward to the future and announced today that Community would have a panel at San Diego's Comic-Con International, according to TVLine. Apparently rumors that the drama surrounding Harmon's departure would keep the show out of Comic-Con were unfounded, and TVLine's Michael Ausiello says that NBC will issue an official statement soon indicating that all seven of the lead actors will be there for the panel. Shortly after Comic-Con, the cast should start getting new scripts in August, and Danny Pudi says that, like the fans, the cast are remaining cautiously optimistic about what new showrunners Moses Port and David Guarascio have to offer. "I never knew what the season was going to be like with Dan," Danny Pudi, who plays the fan-favorite character Abed Nadir, tells TVLine. He said he hoped that we'll see some progression on the Abed-as-filmmaker theme, but he has no specific information yet as to whether that will happen. "It was always a surprise, which is what I loved. Now it's just a different surprise. I think a lot of our questions are going be answered with the first script we get, which will be in August. I think a lot of us are very excited to read that first script and see where we're at."