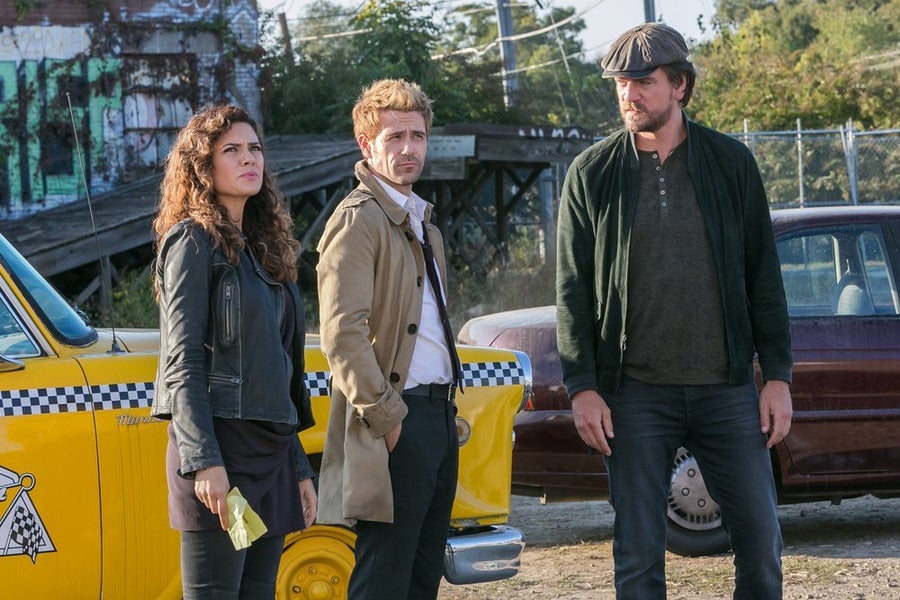 The episode opens with a cloaked man making an incantation and being surrounded by smoke.

Cut to a little girl who is combing a doll's hair. The smoke enters her room and surrounds her, causing her to vanish and dropping the doll.

Here, we offer a recommended alternative to today's credits sequence.

At the mill house, Constantine tells Zed that he has cast a spell around the building so that people looking or it will be led away and around the area -- that it's safe now. He asks who it was that came for her, and she doesn't say anything. He tells her that he is pushing now.

She says that they're called the Resurrection Crusade, a cult that thinks she's important to the future of the world. She wants to disappear, but Constantine says she should do it here. When he asks why she's so scared, she says the leader of the Crusade is her father.

As they talk, they see that the scrying map has started to bleed in New York. Chas isn't at the mill house; he's already en route to Brooklyn to get his daughter. Cut to Chas, who's driving and flashes back to two years ago, when John drunkenly enchants him at a bar to be sure he's okay to drive after having had some drinks. John then leaves with a girl while Chas stays on; the bar catches fire when the pyrotechnics of the band on stage malfunction. Chas stops to save a little girl and then tries to help others and ends up trapped in the building.

Back at the mill house, Constantine is packing a ton of magical gear when Zed tells him that there's already news of a dozen people in Brooklyn falling into unexplained comas. Chas gets home, where he's late and his ex-wife yells at him. He goes up to see if his daughter is asleep or not, though, and she's passed out on the floor with a bloody nose.

Constantine and Zed are called to meet Chas at a hospital. He tells Constantine what happened, and feels guilty he wasn't there. Constantine says her lips are chapped, and uses a brush to see celestial burning, suggesting her soul has left the body. John promises that he'll do whatever he has to to get her back, and says he's going to go see a medium, contact Geraldine and find out where she is so they can find her. They take the doll to go see the medium, along the way encountering Chas's ex-wife who doesn't want Constantine near them.

Flash back to two years ago, and Chas wakes up in a hospital bed, where Renee (his ex) and Geraldine (his daughter) are thrilled to see him. He admits he should be dead, but they're happy he's not.

The medium, named Fennel, works at an army surplus store. When they approach him, he pulls a gun on them, saying he'll never work with Constantine. Chas takes the gun and smashes the Fennel's face with it.

Moments later, they're in the back, where Constantine ofers to be in Fennel's debt if he helps. They channel Geraldine, but before she can tell them where she is, someone else takes control of Fennel's body, warns them off and then burns it up.

John figures out that only five books in the world contain the spell that was used to burn up the medium; they deduce that if they can figure out where the closest one is, they can find the man who has Chas' daughter. Chas is losing his patience. They find a clue, though, and head to Haskins Railroad Yard.

It's invisible when they get there by way of a cloaking spell, but John finds it. They head inside and find a laboratory with shelves full of mad science. In the room, a cloaked man greets them, then pulls his hood off. Constantine introduces Felix Faust, whose skills he insults. He says this time it's his doing, not anyone else's.

When Chas starts to get impatient, he leaps at Faust, who knocks him to the ground. There's a demon that's feeding on the energies of his stolen souls; he tells Constantine that he has to cast the demon back to hell and then Faust will release Geraldine's soul. Outside, they send Chas away, since he's not thinking clearly.

At an abandoned warehouse, they set up a containment circle that they can use to cast the demon to hell. Constantine looks around the room with a rune that has a hole in it and allows him to see beyond reality.Finally, they see the demon; it leaps at them and they lose track of it. They can't direct it so Zed suggests to make it come to them.

Back at the hospital, Chas comes to see Renee and Geraldine, returning the doll. He flashes back again, this time to the day after the fire. Chas tells Constantine that he was healed overnight; Constantine says that his protection spell worked; that Chas was given the lives of the 47 people who died in the fire.

Back at the warehouse, Constantine casts a spell to put Zed to sleep in the middle of the circle of containment, and when the demon comes to get her, Constantine plans to light a fire around the circle to contain the beast...but his lighter won't work. Instead he has to attack it directly with a cattle prod from the army surplus store.

They go to the hospital to get Chas for backup with Faust, and Renee tries to go. John says no, so Zed stays with her instead.

Faust says that since Constantine destroyed the demon instead of casting it to hell, he's changing the terms of the deal and wants more. Once outside, Chas punches out Constantine and drags him into the cab, furious that John hasn't done more to get his daughter. He starts to head back in to see Faust.

Flashback again. This time, Chas is bringing a cake to his daughter. He missed the party helping John slay the Monkey King. His daughter and wife don't understand the obligation he feels to honor the souls inside him.

At Faust's lair, Chas offers him 32 souls in exchange for his daughter's. Faust won't believe him, so to show that he has the souls to spare, he kills himself, saying that after this he'll only have 31.

In the hospital, Zed tells Renee that she's a little psychic and can feel a small piece of Geraldine with them. Renee asks her to try and put them in contact, and Zed tries, channelling Geraldine brief and then collapsing to the floor screaming. While doctors are endeavoring to help her, her purse spills out, including the address of Haskins Railroad Yard, which Renee finds.

Back with Faust, Chas gets up. Faust is impressed by him being a man of his word, and he says he wishes that were true. Faust agrees to take 31 souls, including his own, in return for Geraldine's. Constantine, having woke up, comes and tells him not to do it. When Chas takes Faust's hand to shake it, he tells him that there's been a change of terms; he drops a hand grenade, holding onto Faust. He tells him that they're both going to die today but only one of them is coming back. It explodes, killing the pair, and Renee, who has just arrived, freaks out.

Outside, Constantine talks to Renee, telling her that he's sorry she had to see it. He tells her that he never meant to get between her and Chas, and that he'd change it if he could, but that because he didn't a lot of people, including her daughter, are still alive. He sends Renee to see Geraldine when she wakes up.

Flashback to the day Chas was served with divorce papers; Constantine tells him that he can either continue to work with him, or go try to live a normal life, and that he'll be beside him every step of the way. Back at her house, Renee is delighted to see Chas come in. She sends him upstairs to see Geraldine, thanking him for what he did. In her room, Geraldine is up, saying that she didn't believe he would be there in the morning. she gives him a friendship bracelet, and he gives her a book with pictures of all the people he's carrying with him. He starts telling his daughter their stories.

In the hospital, John is there when Zed wakes up, saying that she "blew a fuse." He tells her to be careful about how she uses her power. She tells him that she talked to Constantine's mother, who says her death wasn't his fault. He's surprised that she saw his mother, but she passes back out again before he can ask any more. He tears up and lays down next to her.