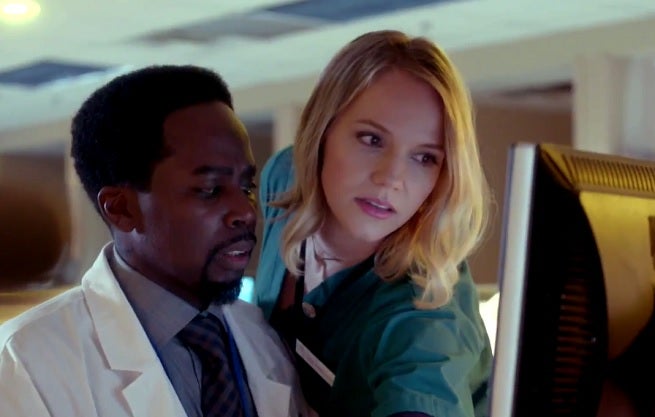 The episode opens on a girl walking down a street, being catcalled by passing cars and men and seemingly scared of everything from the cars to homeless people.

She sees a man who offers her drugs to get over the fact that she's in town for her brother's funeral, then invites her inside with him but she turns to go. WHen she finds a streetcorner and starts to shoot up, there's a sudden electrical disturbance all around her. When she's distracted by it, a man jumps her and plunges two syringes full of drugs into her chest. She's seemingly killed, but when the police arrive to declare her DOA, she snaps awake.

At the mill house, Constantine brings some food for he and Chas; the scrying map is still dry. He goes to find Zed, who apparently has asked to be left alone, and walks through the catacombs of the building to track her down, where she's behind a door, on a bench in a lovely wooded area, meditating. Constantine comes to try and get her out to help; she's reluctant, but he's convincing.

Manny shows up, telling Constantine to look for a woman named Taylor at St. Catherine's Hospital. When Constantine tells him that he's going to verify the case with the map, Manny burns the map, telling him the map is a crutch. John tells Chas they've got a case and to bring his biggest screwdriver.

They jam the screwdriver into Chas to gain entrance into the hospital, where Constantine sees Taylor, the woman from earlier. Chas yanks the screwdriver out of his leg, throwing blood against the wall, to distract the doctors as Taylor stabilizes, and Zed touches her to check on her. The ensuing vision is confusing; she seems to see an angel above her.

As Zed tries to make sense of the vision, Taylor codes and starts to die; Zed starts having a seizure.

Later, she's in a CAT scan. John goes to see Chas upstairs, saying that he needs to see Taylor's body. A large, noisy man comes in to say that his skin graft is coming off becuase he got into a bar fight. He notices as Chas and Constantine head downstairs. When they arrive there, Constantine tries to figure out what made this happen to her, and deduces it's dark matter of some kind. He sends Chas, who wants John to check on Zed, back to the mill house.

John comes to see Zed, who asks him to stay while they're checking her scan. It appears to show a brain tumor. The doctor suggests that the tumor could be responsible for her visions. Zed starts to cry, and John goes to see her. She wants to believe the tumor is why her visions are happening; John doesn't want to believe it.

The man with the skin graft is in his hospital bed when a orderly comes; the light is flickering, and the big man asks him to fix it. The orderly goes to a closet, drinks some booze and then is jumped by something as the lights there flicker, too. He gets the same black veins in his face that Taylor had in the hospital.

John is outside the hospital smoking when a doctor approaches him to bum a cigarette. As Constantine hands one over, the doctor becomes Manny and throws it away. Constantine demands Manny fix the tumor, or he won't work for Manny anymore. Manny says it's out of his hands, and tells Constantine to focus on what he can control. Constantine drops a bottle with some red mist in it on the ground and stomps on it, then cuts into Manny, touching his heart. He's made Manny human.

Manny says that he loses touch with the Heavenly host, its knowledge and his powers when he's in a human body. Before they can go too much deeper, John sees flickering lights and follows them inside to find the orderly's body, bloodied and dead on the ground. Manny throws up in a garbage can. John reaches into the man's chest, opening his chest cavity to find that the man's heart is purple and glowing. Manny says the Black Diamond caused it. John thought the Black Diamond was a legend, but Manny says he was there. There were fragments of the diamond spread all over the world during the Great Flood, and everytime one is found, death follows.

Constantine tells Manny to use his doctor's ID to look up the two victims and see if they had anything in common.

Constantine returns to the mill house to look for information. Chas asks about Zed, and John is evasive, finally admitting that she has a brain tumor. Chas says someone should be with her, but Constantine finds a box that purportedly contains a fragment of the Black Diamond and says that has to be their priority at the moment.

At the hospital, Manny is trying to print up the files for the victims; a pretty nurse helps him and turns him on, making him visibly uncomfortable, while the big man continues to yell about his skin grafts. Eventually the nurse pulls the doctor into a broom closet to make out with him.

Constantine opens the box and has Chas touch the Black Diamond; he needs to see what happens to someone who does so. Nothing happens to Chas right away, but then he starts to seize and gets the black veins. Constantine tells him to drop the stone but Chas punches him, eventually dropping the stone back into the box it came from.

John says he unfortunately thinks he got what he needed.

At the hospital, Constantine reports on what the Black Diamond did to Chas, and the two suss out that it's likely Morris -- the big man -- who was likely their suspect. John says he'll deal with that and sends Manny to talk to Zed.

There, she's reluctant to remove the tumor but a doctor urges her on, telling her about how he has shrapnel stuck too close to his heart to remove. He leaves and Manny tells her who she is. She asks about her visions; whether they're from God or if they're evil. Manny asks her whether she thinks her powers are evil and she says sometimes they feel that way, but since she's met John she's been able to use them to help people. Manny won't tell her clearly that the visions come from God, saying that he can't be sure because he's grounded in the body, but that based on what Zed has said, she has all the answers she needs.

In the hospital, Morris is smoking and the nurse sends him to bed, but he goes elsewhere. Lights start to flickering again. Constantine goes looking for Morris, but he doesn't get there until after something attacks him. Constantine goes after the being with a fragment of the Black Diamond, but gets punched out. Morris is killed before he can wake up. John tells Manny they must be missing something obvious; Manny says John is missing Zed, her support for him. Manny tells Constantine that the doctor was in war in the Middle East, and that he would understand the cost of war; John realizes that the doctor is the killer.

Inside the hospital, Constantine confronts the doctor with the reality that the shrapnel in his chest is Black Diamond. When John takes out his piece, it tries to attract the other piece, causing the doctor pain, and the doctor punches his way through John and Manny.

Zed chases them down, saying she's figured out what her vision means.

As John, Manny and Zed are running from the doctor, Zed realizes that Manny is their salvation; John releases Manny from the spell he cast on him. Before the killer can take them, Manny shows up, spreads his wings and welcomes the killer to Heaven; the doctor vanishes as a result, leaving a number of shards of the Black Diamond, which pull together inside th ebox. John picks it up to take home, thanking God for the assist.

Later, in a chapel, Zed prays. The door opens behind her and John comes in to tell her something about himself: he spends every morning torturing himself, meditating on the idea that everyone he cares about is dead, numbing himself to the idea so that it lessens the blow when someone dies. Manny comes to ask why he doesn't just enjoy his time with them. Zed can see him now, and she tells him that she'll take the pain if that's the cost of her magic and the good she can do. When John leaves to smoke, she asks him again about the source of her magic; he answers only, "I'm here, aren't I?"

Constantine Recap With Spoilers: Angels and Ministers of Grace