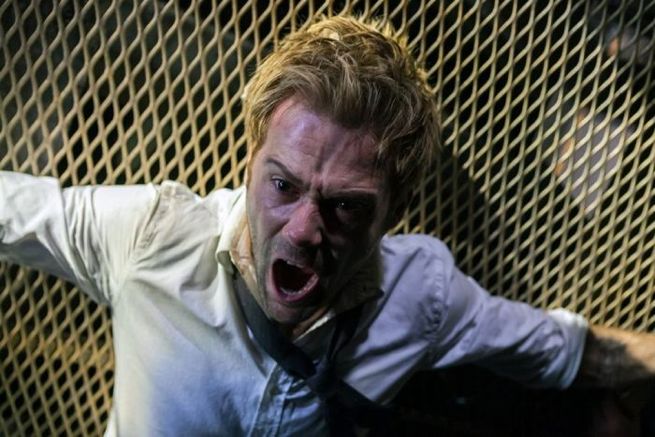 The episode starts typically enough, with an evening noted by dripping animal carcases and voodoo magic. A blonde woman, named Jasmine Fell, enters an abandoned music studio, where she trips through the gruesome scene of animal bodies and painted symbols to unearth a mysterious vinyl record. With the record in tow, she visits her friend Bernie to investigate its uncanny properties. The only condition is that Bernie not listen to the record. Of course, Bernie cannot resist the record’s melodies. What starts off as a pleasant tune quickly descends in a brain-melting ordeal. The record’s music takes possession of Bernie, forcing him to kill himself.

Elsewhere, Zed uses her psychic powers to locate Constantine’s supernatural safe house in the woods. There, she meets Chas. Inside the safe house, Zed finds John performing a bizarre ritual while covered in blood. Apparently, it’s nothing new.

After John cleans up, he informs Zed of Bernie’s—who was an old friend and bandmate of John’s—death. Using her psychic powers, she narrows down Bernie’s corpse. As the two head off to investigate Bernie’s body, John is still unsure if he can trust Zed. John and Zed find Bernie at a local morgue, where Constantine uses an enchanted (and severed) hand to summon Bernie’s spirit. The black magic works a little too well, reanimating not only Bernie, but every corpse inside the morgue. All that Bernie’s corpse can muster however, are the words “acetate” and “moonrise.” Zed deduces that Moonrise must be a link to a record label called Moonrise Records.

With the information in hand, the two head to see Moonrise Record’s head, Marcus Moon. Moon is an old, dying man rested up in a hospital. Moon reveals that decades ago, a man who sold his soul to the devil recorded on an acetate in Moon’s studio on the same night that the devil came to claim him. Somehow, the musician’s damned soul was recorded onto the blank acetate, along with other dark magic. Moon tried burying the cursed record, but Jasmine paid for information on the record’s whereabouts and retrieved it.

Zed and John’s next stop is Jasmine’s. As Constantine pieces together, Jasmine sold her soul to a man named Anton in exchange for her husband’s life. But Anton makes a another deal with Jasmine: If she can give him the acetate, then he will return her soul to her.

When John confronts Anton, Anton reveals that he made the deal with Jasmine at the behest of Papa Midnite. Recognizing his old foe’s presence, John locates Papa Midnite in another room. As Constantine confronts Midnite, he is struck from behind and knocked unconscious. When he awakens, Constantine finds himself bound in an old garage. There, Midnite reveals that he wants the acetate for its value to the devil. Apparently, the acetate can be bartered with  as a “get out of Hell free card.” Then he injects Constantine with an anti coagulant before slitting John’s wrists. As John slowly bleeds to death, Midnite departs to obtain the acetate. Before leaving, however, he leaves behind a bottle of vitamin K, which will stop the bleeding, just out of John’s reach. Midnite figures that if John is willing to work hard enough, then he can save his life.

As John bleeds out, Manny pays him a visit. Manny questions John’s motives, thinking that John wants the acetate for himself. Of course, Manny doesn’t cut John loose. To make matters worse, John is almost robbed and murdered by a passing bum, but Zed saves him just in time. Taking the vitamins, John stops the bleeding.

Elsewhere, Papa Midnite’s henchmen steal the acetate from Jasmine’s home. While they wait for their boss to rendezvous and retrieve the record, the henchmen become possessed by the acetate’s demonic energy. Corrupted, they take the acetate to a populated nightclub and play it. Possessed by the dark record, all of the club’s patrons kill each other. John discovers that the acetate’s demonic power is viral, hypnotizing its host to keep playing its music to an increasingly large audience. The more souls it can corrupt, the better. The possessed henchmen’s next target, on behalf of the acetate: A local radio station. John, Chas, and Zed find the targeted station and disrupt the broadcast before it reaches the public. Unfortunately, Papa Midnite locates the acetate too. But before Midnite can obtain the record, John summons a portal to Hell that takes the acetate for its own.

Midnite doesn’t have the record, but Jasmine’s soul is still on the line. With her soul slipping, John forces Anton to literally eat the contract that Anton made Jasmine sign. With the deal broken, Jasmine’s soul is saved. But not all is well for Constantine. Midnite, enraged by Constantine’s interference, make a special voodoo doll in the form of John Constantine before setting it ablaze. As the episode closes, Midnite makes it clear that he will torment Constantine until he has his revenge.