With The New 52: Futures End and Earth 2: World's End coming to a close on April 1,  DC Comics will kick off its far-reaching, two-month Convergence event...and what comes out of it promises to be a very different DC Universe.

The March 2015 solicitations revealed that more than a dozen DC Comics titles will roll to a close before Convergence, and we'll assume there will be more to launch following the fallout from the event...but we were surprised to find one particular title not among them: Earth 2.

The comic, which was launched as part of the second "wave" of DC's New 52 titles, was everybody's favorite for the chopping block since it's been suggested numerous times in numerous ways that World's End could be literal, and that a world will die by the end of the series. Earth 2, a solid-but-not-spectacular seller, seemed an obvious book to disappear, especially if the world it was set on was destroyed.

The war taking place in the book is backstory for The New 52: Futures End, and in that reality, Earth-2 was destroyed and a number of its survivors shanghaied on the primary DC Universe Earth.

And while it's not guaranteed that Earth 2 will be the world that dies in Worlds End, it still seems fairly likely. So...what does that mean? How would it work to have an Earth 2 series but no Earth-2? 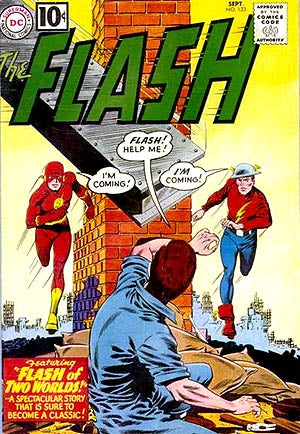 We have an idea.

First of all, a little backstory for the uninitiated. Earth-Two, in the classic comics of DC's Silver Age, was a world where Golden Age heroes of the '40s resided. Please note that we'll toggle back and forth between uses of "Earth-2," "Earth-Two" and "Earth 2" as they apply to the stories or various worlds called by those names that are being described at the time. The occasional formatting change is intentional.

Earth-Two was created to explain how Silver-Age versions of characters such as the Flash and Green Lantern (who resided on Earth-One) could appear in stories with their Golden Age counterparts, beginning in the 1961 story "Flash of Two Worlds."

The Earth-Two continuity included heroes, including the Justice Society of America, whose careers began at the dawn of World War II, concurrently with their first appearances in comics. It was, in effect, a way for DC to have their cake and eat it too by saying that their earliest stories still happened and still counted, but that the world on which they took place was no longer one of primary interest to the publisher or its readers.

The worlds would cross over from time to time for more than two decades before Earth-Two, along with the four other surviving Earths of the DC Multiverse, were merged into one in the 1985 miniseries Crisis on Infinite Earths.

The resultant Earth had a long history and a number of "legacy heroes" -- that is, either sidekicks who had grown into their mentor's job and name or successors of some other type. The surviving members of the JSA continued to train legacy heroes up until the death of that unified Earth in Flashpoint. 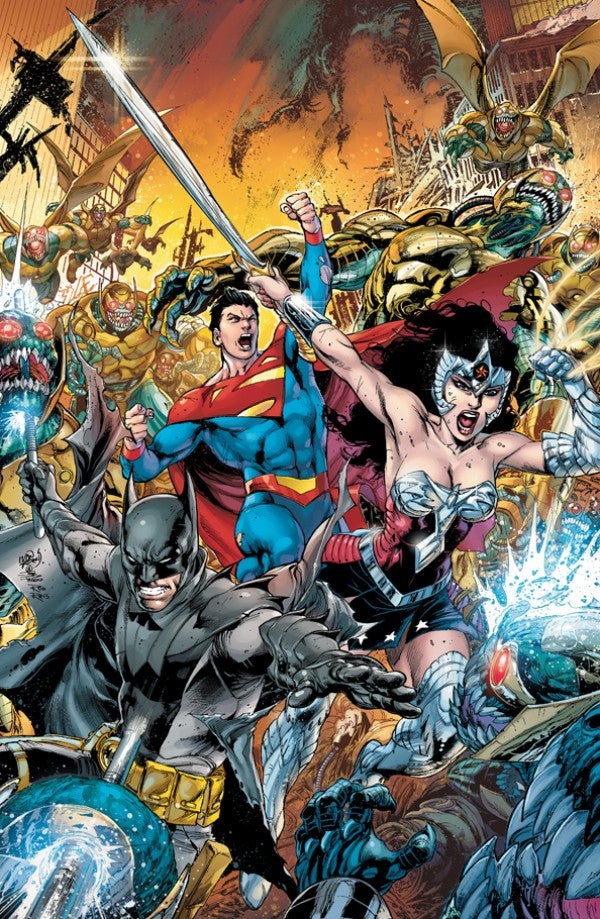 The Earth 2 of The New 52 had little in common with the original; while many of the names were the same (Jay Garrick was The Flash and Alan Scott Green Lantern), the stories took place more or less concurrently with the main DC Universe, and the closest they came to really playing up legacy heroes was to replace characters like Superman, Batman and Wonder Woman, who died during an attack on the world by Darkseid.

The messaging was clear at the start of The New 52: Those old stories exist only in reprints, and will not be revisited. When The Multiversity started to make its way through the DC Universe, Grant Morrison included callbacks to a handful of worlds of the long-defunct "classic" multiverse but none to the Earth-1 and Earth-2 locales and stories that made up most of the fans' reading experiences.

In Futures End: Booster Gold #1, the title character met up with a version of himself from the future...but apparently not his own future. The older Booster seen there (as well as in Justice League International Annual #1) is actually one fans had seen in Booster Gold Volume 2 in the years leading up to Flashpoint. That's where the road to Convergence started, and that's where things get very interesting.

As most fans know by now, Convergence will feature stories set on the pre-Flashpoint DC Earth; a version of the world from the early '90s set shortly before Zero Hour; pre-Crisis Earths 1, 2, 5, X, S and more. 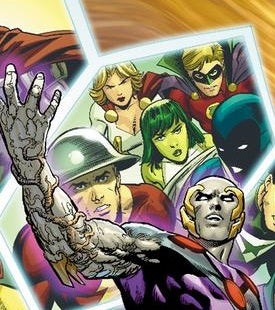 So here's what occurred to us:

Could one of these worlds come, full-fledged, back to "life" to be the Earth-2 of the DC Multiverse if the current one actually did die?

If we see the end of Earth 2 the world, but not the end of Earth 2, the comic book, there is an obvious answer as to where those characters could end up...and one that could inject a really interesting element into DC's multiverse.

...What if it was the planet on which Convergence takes place?

A patchwork quilt of doomed DC worlds, the world of Brainiac/Telos is one that will apparently serve a purpose similar to the Battleworld of the original Secret Wars, as various DC Elseworlds and forgotten universes are pitted against one another.

It seems unlikely that these worlds will rejoin the DC multiverse at the end -- although not impossible. If they did, could one of them be the new Earth-2?

Certainly there would be an appeal to having Earth-2 be the world of the "classic" Jay Garrick, Alan Scott and the like. Or, in a move that would be even closer to the original intent, to have it be the pre-Flashpoint DC Universe, allowing fans to know that their old stories carry on in spite of the universal reboot.

The problem, of course, remains the same as it was at the start of the New 52: In 1985, there were a lot of casual readers, kids and other people who would be somewhat more likely to go with the flow after Crisis. In the time since, the age of the average comic book reader and the duration of the readers' fandom has climbed steadily.

What does that mean? It's much harder now than it would have been thirty years ago to enforce a regime change where the world many fans still call the "real DC Universe" was still out there somewhere in the multiverse. 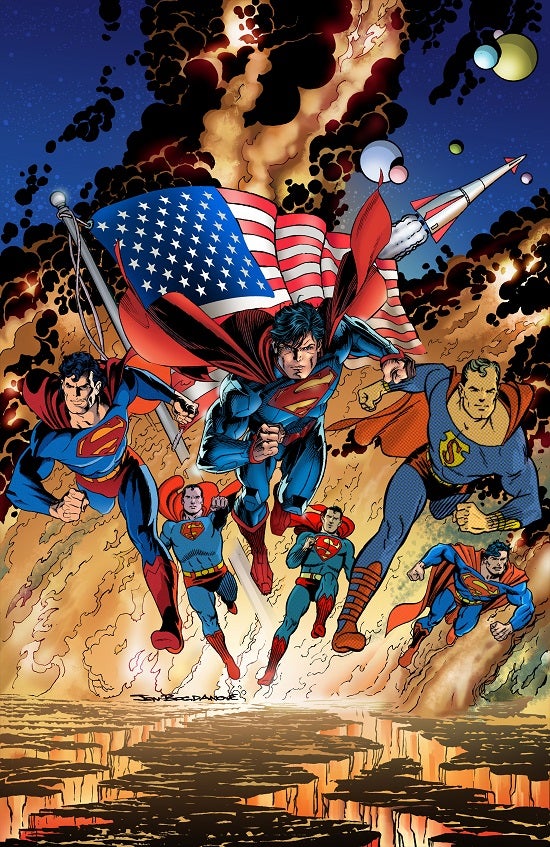 Of course, Dan DiDio and company seem to have assumed that keeping the pre-Flashpoint DC Universe out of the established multiverse would keep fans from assuming it was still "out there somewhere" and could be reinstated.

This is, of course, incorrect; there have been dozens of theories as to how the previous iteration of the DC Universe could be brought back...including one of our own here at ComicBook.com that suggested the Old Booster from JLI Annual was the Old Booster from Booster Gold and Time Masters Vanishing Point...which proved to be pretty spot-on.

If there's one thing that nudges us toward the worlds of Convergence all joining into the DC Multiverse again, it's that there are so many attractive possibilities in terms of which one to "keep" if we had to narrow down to just one, it would be very difficult to do.

In any event, it's our guess that the Earth 2 title following the events of Convergence will take place...on the Convergence planet.

Hell, they've been very coy about what world it is that Brainiac has taken control of and fused with to become Telos. For all we know, that could actually be the current Earth 2.

In any event, it's our guess that Earth 2 will be destroyed in some form, some of its inhabitants will survive and relocate, either to the primary Earth or to the world on which Convergence takes place. From there, you have a number of options; will it become one of the previous worlds, in a way that makes it recognizably that one? Will it continue to be a patchwork world, where the Earth 2 title could tell stories from a number of DC's most popular "Elseworlds?"

Either way, we're guessing that Earth 2 will be one of the titles most dramatically affected by Convergence and that, in some form, a number of classic DC characters will be appearing in it, saved from seemingly certain doom at the end of the miniseries. Whether those characters will be on a recognizable alternate world, a new one, or something else is anybody's guess...!

What do you think? Would you like to see the pre-Crisis Earth-2 or the pre-Flashpoint DC Universe take over the Earth 2 comic? Chime in below.

Convergence and DC Comics' Earth-2: A Way To Bring Back the Pre-New 52?