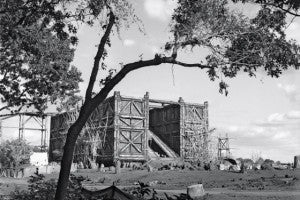 Filmmaker Darren Aranofsky's replica ark, having been built for Man of Steel star Russell Crowe's biblical drama Noah, is apparently in danger of being damaged by the tropical storm that's making its way through the Eastern United States, according to the Los Angeles Times.

This would be the second Hollywood-friendly vessel damaged by the ship in two days, though it was much more difficult to see the irony or entertainment value in yesterday's sinking of a replica tall ship that left one crew member dead and the captain lost at sea.

The ark is currently housed at Oyster Bay on the Long Island Sound; while no damages have yet been reported to the set, Oyster Bay is in the path of the storm and since the ark was never meant to be seaworthy, it's possible the filmmakers will need to make some post-storm repairs before they can complete the film, which is reportedly almost finished shooting.

Says the Times, "The outdoor ark, which measures 450 feet long and is 75 feet tall and 45 feet wide, was not intended to be seaworthy. With production on the film wrapping up soon, the ark was scheduled to be used only sparingly in the weeks ahead and was partially dismantled over the last several days. But if the storm damages the Oyster Bay boat materially, “Noah” may need to organize some flood repairs."

Emma Watson, the Harry Potter star who will appear in the film alongside Crowe, tweeted yesterday that the irony of a storm potentially delaying production on Noah is not lost on the filmmakers.