With only two issues left before the (apparently) status-quo shattering Savage Dragon #175 hits shelves and Comixology, Malcolm and Angel Dragon are back in business today and back in conflict with Mister Glum and...well...Angel. It all makes sense in context. At any rate, the Dragon family splits the issue between new revelations about a few subplots and an A plot that has Angel more actively joining the superhero fray and, as ever, Erik Larsen has joined Gavin Higginbotham and myself for a discussion of the issue. Russ Burlingame: So first thing's first, I guess--should be a good day for the new issue, right? I mean, it's not like there's anything else going on at the shops today. Erik Larsen: I'm pretty sure other publishers did a little counter-programming when they got wind that another issue of Savage Dragon was in the pipeline. RB: A little more seriously, though, do you think it would have been nice to have #175 ship today (as was reported earlier) and have a real dramatic, status quo-shattering issue on the stands and on Comixology at the time when DC's big push has got everyone talking, or do you think it's better that it got pushed and isn't going to be lost in the flood? EL: It's probably just as well that it missed its mark. I'm actually going to skip a month of solicitations to try and get back on track. It's been a busy year for me. Gavin Higginbotham: Rock House Diner crew active the past two issues. Does this mark the return of these characters as regular supporting characters (as regular as you can get in this book, anyway)? EL: It'll be as regular as anything is in this book. It's their hangout as much as school or the playground or police station. If they're getting a bite to eat--it'll likely be there. GH: Angel is back to being Battle Girl after not using that codename for the past couple of years. Any reason to reaffirm that identity? Was it to differentiate her further from "Evil" Angel? EL: Somebody else at Image wanted to use the name and I thought--hey, wait--I have dibs on that. I never really meant to ditch it, really, but I'm thinking it's more a case of Angel not wanting to be in the shadow of Malcolm and Dragon quiet so much. She's not really grabbing headlines as Dragon's daughter so why not try doing her own thing? At this point Malcolm is getting all kinds of attention and honestly--she's a bit jealous of that. 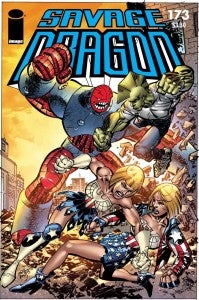 GH: The Church of Savage Dragon? Wow. If that's a whole church where the members are dedicating themselves to an afterlife featuring making love to a bevy of leggy supermodels then it could well be the biggest religion in the world in no time! EL: It's more of a case of them making their own afterlife--not necessarily embracing his. GH: I guess the Uncle Willie sub-plot isn't over just yet? EL: It's not over until it's over. GH: Who were Glum and Angel's disguises based on (if anyone)? Glum's was so familiar looking that I'm kicking myself trying to figure it out EL: I dunno if I want to say it in a public forum but they're straight out of Hulk #5 by Lee and Kirby. Angel is Betty Ross and Glum is that outer space guy whose name escapes me at the moment. GH: Has P.J. become the first new member of the Little Wise Guys in decades? EL: Yeah. The Little Wise Guys were all pretty cartoony characters except for the one so I bumped him off and replaced him with another cartoon character. I like the idea of having cartoony supporting characters like the ones in the '40s. PJ is certainly that. GH: The Rex sub-plot continues on. Between Rex Dexter and Robot Rex and Monster Rex… is there room in the universe for all three? EL: We'll see, I suppose. RB: That was a great way for Glum and Angel-X to be revealed; it never would have occurred to me to consider the lack of our funds. How'd that one pop into your head? EL: Seriously--I don't know where a lot of this stuff comes from--I'm just glad it does. It was one of those things that works well as a reveal though because you get that, "of course" moments as a reader and it's typical of Glum as well--he thinks things through but not well enough. RB: In the thousands of times "You don't know who you're messing with" has been said in media, has it ever been more true than on the Glum reveal? EL: I thought that worked out pretty well too--it was literally the case. GH: Was this issue a teaser of the Janey twins as future ass-kickers when they're a bit older as they leapt into action here with the rest of the heroes? EL: That was always the plan. Same deal with the Jonson boys. That was the plan from the start. GH: Is the experiment regarding using old panel layouts helping with your schedule? Has the pace quickened any? EL: Not a whole lot--it's just made it more challenging which translates to more fun. RB: Angel's 'you hit my brother!" rage shows up here again. In the absence of Malcolm, she seems like she 'd be tough enough and powerful enough to do this gig on her own most days--but not quite good enough at it to avoid getting hurt or causing massive property damage. Do you think that's a fair assessment? EL: Oh sure. Angel is pretty powerful. I don't want this to be a Captain America and Bucky kind of relationship where she's getting threatened, kidnapped or held hostage every month. She's not there to play hostage. She's a valuable part of the team--but it's Malcolm's book. RB: And given how impressive she's been with her power a handful of times lately, does that put Glum's Angel on a whole other level of threat from most of the villains we see on a month-in, month-out basis? EL: If Angel wasn't there, maybe, but she is there and the two Angels are pretty evenly matched, I think. Dark Angel's been in more scraps but our Angel has had training from SuperPatriot and he's no slouch. It's more of a strength vs. skill battle between those two. GH: Just how strong is Daredevil's boomerang? He's a normal man but he put Angel down fairly easily with a single strike to her near-invulnerable neck. Impressive! EL: It's razor sharp on one side and he's used it to lop off heads in the past. And do remember--Angel gave him a blood transfusion so he's more powerful than ever. The guy can do damage. RB: Man, this is the second time in only a few months that Glum has appeared to lose his Angel. Seems like sooner or later he'll HAVE to be pre-emptive about that even if she turns out to be OK this time! EL: I would think that he'd be a LOT more cautious next time, given how things went. GH: Over in the Vanguard back-up, it appears that Gary dislikes old dangling plot threads as much as you as he ties up the one concerning Modem. Or was this something that you asked to happen? Or are you pretty much allowing Gary & Frank free rein over the serial? EL: We talk things over a bit but this one was all Gary. He decided to tie that up.