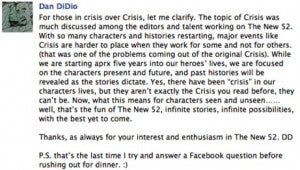 DC Comics Co-Publisher Dan DiDio threw the Internet fan community for a loop on Friday when he declared on his Facebook page, "After further review, there have been no Crisis events in the new DCU."

Crisis on Infinite Earths, Infinite Crisis and Final Crisis are so wide-ranging and continuity-intensive, and each include so many characters who may or may not exist in the new DC Universe. That said, whenever asked at events, members of DC editorial had established these stories as being among the ones which are still in canon despite the "Flashpoint effect."After coverage by Bleeding Cool and a number of complaints by fans on message boards, DiDio decided to clarify his position a bit in hopes of fighting the fires a bit.

""The topic of Crisis was much discussed among the editors and talent working on The New 52. With so many characters and histories restarting, major events like Crisis are harder to place when they work for some andnot for others. While we are starting approximately five years into our heroes' lives, we are focused on the characters present and future, and past histories will be revealed as the stories dictate."

With apparent references to Crisis on Infinite Earths in Hawk & Dove #1, many fans are not upset not only because a favorite story has been removed from continuity but also because early stories appear to contradict themselves--although it's been said in the comments thread at the Bleeding Cool story that writer Sterling Gates said the linewas written with a "small C crisis" so as to allow for flexibility in the matter.