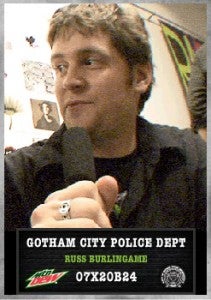 A new, interactive Gotham City website launched today as a tie-in with the new Batman-themed Mountain Dew flavor, Dark Berry. In it, you can see schematics of the Batman costume, the Tumbler and headlines from Gotham City papers to keep you apprised of what it is what Bane's doing.

There are four areas in the game, but only three you can currently unlock: 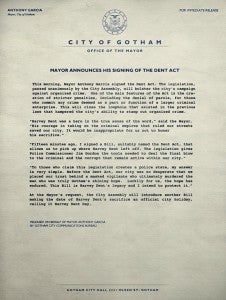 Open as soon as 5 million fans redeem codes found under bottle caps and inside soda packaging (or, more accurately, once 5 million codes have been redeemed) will be the Batcave, where fans will be able to access exclusive footage. At present, that level is only scheduled to open on July 8 unless the 5 million codes come in sooner, at which point it'll happen immediately.

Most of the rest of the site works like the MyCokeRewards site does; you can trade in your bottle redemption codes for prizes and enter raffles to win bigger-ticket items like a custom PS3 or a Dark Knight Rises script signed by Christopher Nolan.

"We have a good mix of items that are branded both exclusive Dew and Dark Knight Rises, and some pieces that really tap into Gotham City to get fans excited about the movie," says Zach Harris, senior brand manager for Mountain Dew, in an interview with USA Today.

You can also use the site to track the Tumbler Tour, although arguably the most interesting thing that they have to offer is tickets to advance screenings of The Dark Knight Rises--that's something we were led to believe might not happen at all, but apparently the good folks at Mountain Dew have an inside track.