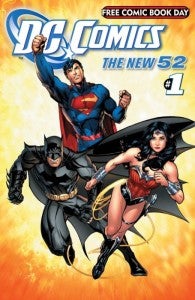 DC Comics announced today via its blog The Source that their Free Comic Book Day title--which previously had been announced, and a cover shown, but about which there had been no details--will offer not just a new Justice League story by Geoff Johns, Jim Lee and others as well as teases of upcoming DC titles. Given that the cover (shown at right) still features the DC logo which will be replaced in May, the art may not be final. "There will also be preview material from DC Comics - The New 52 'Second Wave' titles, including Batman Incorporated, Dial H, Earth 2, G.I. Combat,The Ravagers and Worlds' Finest," said DC's blog post. The fact that it refers to the Second Wave titles as "including" those titles but goes on to name all of the already-announced books is particularly interesting because the post concludes with, "But that's not all; there are still more surprises to come." More to come, you say? Like maybe a new title announced for Jeff Lemire sometime in the next couple of days? Intriguing...!