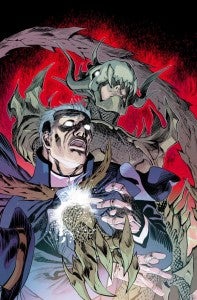 is an 18-part story beginning in Justice League Dark #24 and stretching on until March 2014, according to DC Comics, who released information about the story and a first look at its titular villain at their blog today. The Forever Evil: Blight checklist can be found at the foot of this article, rolling through the Justice League Dark, Constantine, Trinity of Sin: The Phantom Stranger and Trinity of Sin: Pandora titles between now and when it concludes in March. As DC explained it, John Constantine survived the Crime Syndicate's ruthless invasion of Earth when the remainder of the Justice League Dark seemingly did not. Constantine will refuse to believe that his teammates – particularly Zatanna – are dead. Therefore, he casts a spell to locate them … but his search is quickly blocked by a dominant force within the metaphysical world. It seems that the Crime Syndicate's invasion has significantly enhanced the levels of evil in the universe, and that this evil has a physical manifestation: Blight. Along with Swamp Thing, Nightmare Nurse, Pandora, Phantom Stranger and The Question, Constantine will need to defeat Blight if he wants to ever see the woman he loves again. But when Blight becomes aware of Constantine's quest and draws in a human host to take him down, will Constantine and the army he's assembled be enough to battle a force that encapsulates all the evil in the world? Check out theconcept art for Blight below, along with the checklist. 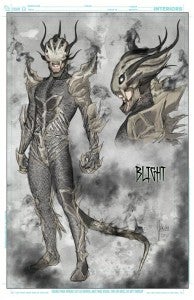 PlayStation Plus 1 Year Subscription Is $40 for Cyber Monday

PS5 Restock Hits Walmart Today for Cyber Monday: Here's How to Buy One